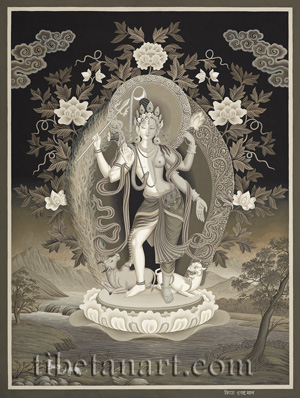 Ardhanarishvara, meaning the 'Lord (ishvara) who is half (ardha) woman (nari)', is a composite form of Shiva and his consort Parvati fused into one body, similarly to how in Greek mythology, Hermaphroditus, the son of Hermes and Aphrodite, merged with the nymph Salmacis to form one unified androgynous body.

A legend relates how Brahma, the creator, once asked Shiva to divide himself into two halves, and upon witnessing this Parvati said: "Let me reside in you permanently, embracing you limb by limb." Parvati then merges into Shiva's body and all duality is eliminated. Another legend relates how Brahma first creates the male 'lords of beings' or prajapati, then commands them to create other beings to populate the three worlds, but they are unable to do so. Brahma then meditates upon Shiva, who spontaneously appears in the form of Ardhanarishvara to reveal to Brahma the procreative necessity for both male and female sexes.

A verse from the Kurma Purana states: "The great Lord, Maheshvara (Shiva), never delights with a wife who is distinct from his own self. The joy within him is called the Goddess." Thus Shiva is genderless.
Shiva is the All and thus inseparable from his own energy or shakti. As a composite deity Ardhanarishvara represents the merging of all dualities into a single unity, the fertile cosmic seed that engenders the spirit or life force (prana) with matter (bhuta), or the union of primordial man (purusha) with mother-nature (prakriti).

Within the Hindu kundalini-yoga tantric traditions Ardhanarishvara is the presiding deity of the ajna-chakra, the two-petal lotus that is located at the forehead and commonly referred to as the 'third eye' of clairvoyance or divine wisdom. It is within the ajna-chakra that the two main subsidiary psychic nerve channels meet and merge their energies together into the central-channel or sushumna. The white channel that ascends on the right side of the body is known as the pingala or 'lunar-channel' and identified with Shiva; and the red left channel is known as the ida or 'solar-channel' and identified with Shakti. The white and red essences or 'drops' that flow through these channels are symbolically equated with semen and uterine blood, and it is essentially on this esoteric level of polarity symbolism that the composite form of Ardhanarishvara can be best understood.

In this lovely sepia composition by Devendra Man Sinkhwal, Ardhanarishvara is shown standing upon a moon disc and lotus that arises above the tranquil waters of a lake. Shiva manifests in the white male or right side of Ardhanari's four-armed body, and Parvati in the red female or left side, with the median-line of the central-channel defining their unified halves. The arc of Shiva's aura appears as a column of fire, while the arc of Parvati's aura is composed of scrolling lotus motifs. Nandi, Shiva's white bull vehicle, rests peacefully on the moon disc behind his foot, while Parvati's roaring white lion vehicle crouches behind her foot.

Shiva's half-face has a bow-shaped right eye, his forehead is marked with the three horizontal lines of the Shaivite tripundra, his crown is adorned with five white skulls and loops of rudraksha beads, and his matted hair-locks are piled-up into a topknot that is crowned with a white crescent moon and the cascading waters of the river-goddess Ganga. His five-jewelled crown, earrings and neck choker match those of Parvati, while his bracelets, armlets, anklet and two lower necklaces are fashioned from rudraksha beads. He wears loincloths of silk and tiger-skin, and the great naga-serpent Vasuki is draped over his shoulder. With his first hand he makes the abhaya-mudra of fearlessness, while with his second hand he holds aloft his twin attributes of a trident and damaru.

Parvati's half-face has a lotus-like left eye, while the third-eye that she shares with Shiva is bow-shaped. Loops of pearls hang from her crown and belt, her middle necklace is fashioned from pearls, while her chained lower necklace, armlets, anklets and heavy bracelets are fashioned from precious metals. Her breast is full, her nipple aroused, her waist is slender, and strands of her hair hang freely about her shoulder. She wears lower garments of silk, and a long scarf that billows around both sides of Ardhanari's unified body. With her first hand she holds aloft a red lotus, while with her lower hand she makes the boon-granting varada-mudra. A canopy of lotus flowers and leaves encircles Ardhanari's aura and scrolling halo, while two deer rest and graze in the tranquil lower landscape of this painting.