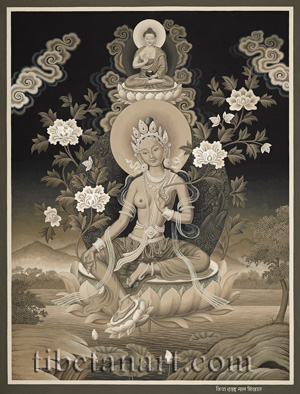 This beautiful sepia painting by Devendra Man Sinkhwal shows Green Tara seated in her traditional posture of royal-ease upon the white moon disc of her lotus seat, with her left leg drawn up and her extended right foot resting upon the moon disc of a small lotus pedestal. Both of these lotuses arise from the rippling waters of a lotus-lake, which has a solitary acacia tree growing upon its right bank, many bushes on its far bank, and distant hills in the background.

Tara is beautiful, graceful and youthful like a sixteen-year-old, with firm round breasts, a narrow waist, two lotus-like eyes, a sweetly smiling face, and delicate features. She wears a long diaphanous scarf that curves and billows around her upper body, a sash that encircles her waist and loops over her left shoulder, a silk underskirt, and an embroidered silk apron or loincloth. Her golden crown is adorned with five radiant jewels, and loops of pearls hang beneath her belt. She wears heavy golden bracelets and earrings, delicate armlets and anklets, and the three traditional Newar attributes of a golden neck choker, a pearl and gold necklace, and a chained silver medallion. Her long black hair is piled-up into a topknot, while some of its loosened strands hang freely about her shoulders. With her lowered right hand she makes the boon-granting varada-mudra of supreme generosity, as she holds the stem of an immaculate lotus between the tips of her thumb and third finger. And with left hand she makes the abhaya-mudra of protection in front of her heart, with the tips of her thumb and third finger holding the stem of another immaculate lotus.

Tara's dark aura is ornamented with scrolling lotuses, billowing clouds, and the images of a dancing goddess, an elephant, and a garuda. A canopy of lotus flowers and leaves surrounds her aura, while amidst the clouds above her halo appears the seated form of Amoghasiddhi Buddha. Amoghasiddhi, the 'All-Accomplishing One', is the 'Lord of the Karma or Action Family' to which Green Arya Tara belongs. He is radiant and green in colour, wears the three red monastic robes, and sits in vajra-posture upon a moon disc and lotus. With his raised right hand he makes the abhaya-mudra of protection or fearlessness in front of his heart, while his left hand rests upon his lap in the dhyana-mudra of meditation, with his blue alms-bowl resting upon its open palm.