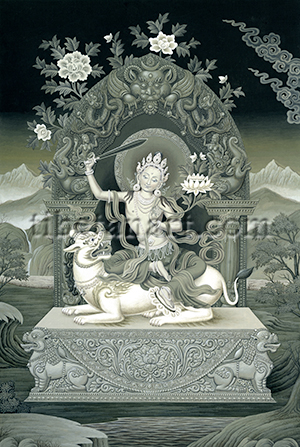 This lovely sepia miniature painting depicts the Bodhisattva of Wisdom, Manjushri (Tib. Jam-pa), or Manjugosha (Tib. Jam-yang), meaning the 'Gentle Voiced', as the 'Lion of Speech or Debaters'. He sits on the back of a roaring white lion that crouches upon an ornate stone lion-throne. This stylized lion appears in the traditional Newar form as a guardian of sacred places, and it turns its fierce head back to gaze up at Manjushri. The lion wears silver necklaces and a large jewel on its crown, below which hang the cascading locks of its mane.

Manjushri sits in a posture of royal-ease (Skt. lalitasana) upon his white lion vehicle, with his right leg drawn up and his left leg partially extended with its foot resting upon a small white moon-disc and lotus pedestal. He is saffron-orange, like the colour of refined gold, with two arms, and is youthful like a sixteen-year-old with a sweetly smiling face. He is adorned with the five divine silk garments and eight jewel ornaments of of a peaceful sambhogakaya deity or bodhisattva, and his long sapphire-black hair is piled up into five topknots, and to indicate his innate five kinds of wisdom he wears a five-jeweled crown.

With his right hand he holds aloft his blue iron sword of pristine-awareness, which cuts through the net of misunderstanding and severs all ignorance and defilements. And with his left hand he holds the stem of a lotus in front of his heart, which blossoms at the level of his left ear and supports upon its open petals a text on the 'Perfection of Wisdom' (Skt. Prajnaparamita-sutra) in a hundred thousand lines or stanzas.

He abides amidst a beautiful natural landscape of trees, water and rock formations, with a lake, waterfall and distant snow-capped mountains in the background. Ascending behind the flat stone-plinth of his lion-throne is the 'six-ornament back-support' of his torana or enlightenment throne. This is decorated with the traditional Newar elements of two vase-mounted pillars that support the torana's upper arch, upon which stand two fierce makara or 'water-monsters', with two female nagini or 'serpent-queens', and two jewel-grasping dragons above. The large serpent-devouring head of Cheppu or kirtimukha, the 'face of glory', crowns the top of this ornate torana.