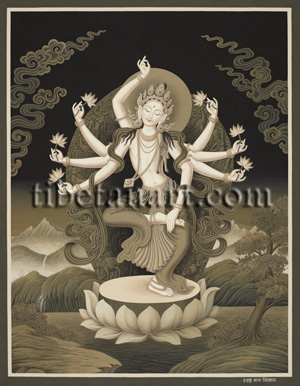 Padma Nrityanath, or Padma Narteshvara (Tib. Padma gar-gyi dbang phyug), meaning the 'Lotus Lord of the Dance', is a graceful aspect of Avalokiteshvara with one face and either two, eight, or eighteen arms. He appears here in this sepia composition in his white eight-armed aspect, as he joyously dances in bow-and-arrow posture upon the white moon disc of his lotus pedestal.

He is peaceful and youthful like a sixteen-year-old India prince, with a slender body that dances in triple-bend (Skt. tribhanga) posture, with a sweetly smiling face, two gentle bow-shaped eyes, and eight arms. Six of his hands hold the stems of pinkish-white lotuses with eight open petals, while with his other two hands he makes the gesture of 'snapping his fingers' in the gesture of dance, and resting his open palm upon his raised right foot. He wears the eight golden ornaments of a five-jewel crown; bracelets, armlets and anklets: a belt strung with pearl loops, and the traditional Newar ornaments of a neck-choker, two small necklaces, and a chained silver medallion. Half of his hair is piled up into a top-knot, while the other half hangs freely about his shoulders. Lokeshvara's characteristic emblem of an antelope skin is draped over his left shoulder, and he wears lower garments of embroidered silk, and a long silk scarf that entwines around his upper body and billows out on either side of his lower body.

His ornate aura is embellished with the auspicious symbols of dancing goddesses, peacocks, a deer, a mythical sharabha or garuda-lion, an elephant, and a makara or water-monster.