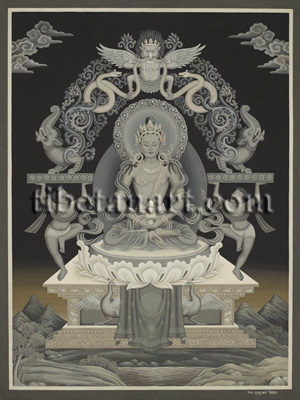 Amitayus, meaning 'Boundless Life', is the red sambhogakaya aspect of Amitabha Buddha, who is specifically associated with long life practices and rituals. Amitayus is also known as Aparamita or Aparamita-jnana, meaning “Infinite Life and Wisdom”, and in his main red sambhogakaya aspect Amitayus is frequently depicted in a trinity along with the two great longevity deities, the goddesses White Tara and Ushnishavijaya. Thangkas of this 'Long-life Trinity' are often commissioned to help remove hindrances, alleviate illnesses, prolong life, and to help facilitate an auspicious rebirth for someone who has recently died.

Amitayus's specific attribute is a longevity-flask filled with the nectar of immortal wisdom that rests upon the palm of his joined hands as they rest upon his lap in the dhyana-mudra of meditation upon emptiness. This golden flask is usually decorated with four leaf-shaped pendants that cascade in the four directions from its upper rim. The top of the flask may be sealed with a small wish-granting tree, the branch of a blossoming ashoka tree, a bunch of fresh leaves, a red lotus, a red jewel, or an aura-shaped plaque inscribed with Amitabha's red syllable, HRIH

This monochromatic sepia composition depicts Amitayus seated serenely in vajra-posture upon a white moon disc, an open lotus, and an ornate peacock throne. He is adorned with the five silk and eight jewel ornaments of a sambhogakaya deity. Half of his long black hair is piled up into a topknot, whilst the other half hangs freely about his shoulders. His halo is encircled with an inner ring of pearls and an outer ring of scrolling jewels. An embroidered silk cloth hangs from the centre of his throne, partially covering the two peacocks that gaze towards each other. The throne's top step is ornamented with scrolling deer and swan motifs, and the two pillars on its central facade are decorated with the gaja-simha emblem of an elephant, lion and lotus.

Standing on one leg in 'bow and arrow' posture on top of his throne are two young gods, who hold up the cross beam of the throne's backrest or torana with their two hands. This cross beam is decorated with a row of eight-spoke dharmachakra wheels, and upon its top stand two makaras or 'water-monsters', with their fabulously curling tails forming the arching framework of the upper torana. Entwined in these scrolls are the two naga-serpents that the crowning form of garuda grasps and devours with his talons, beak and hands