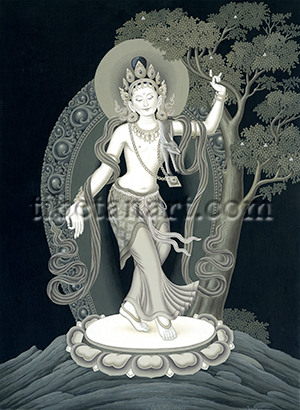 Chintamani Lokeshvara, the 'Wish-granting gem (Skt. chintamani), and Lord of the world (Skt. lokeshvara)', manifests as one of the hundred-and-eight different Newar Buddhist aspects or manifestations of Avalokiteshvara, the bodhisattva of great compassion. He is radiant white in complexion like the autumn moon, and youthful as a sixteen-year-old, with two arms, two gentle bow-shaped eyes and a sweetly smiling face. In 'triple-bend' posture he stands gracefully upon a white moon disc and an open lotus with sixteen petals, as he steps out towards the right.

With his raised left hand he grasps the branch of a wish-granting tree, the trunk of which rises between his lotus pedestal and scrolling jeweled aura, while its leafy canopy ascends over his halo with small triple gem-like fruit adorning the centres of some leaf clusters. With his lowered right hand he makes the boon granting varada-mudra of supreme generosity as he holds a small pearl-like wish-granting gem between his index finger and thumb.

He wears the eight golden ornaments of a sambhogakaya deity: a five-jewel crown; bracelets, armlets and anklets: a belt strung with pearl loops, and the traditional Newar ornaments of an ornate neck-choker, and a chained necklace with a silver medallion. Half of his hair is piled up into a top-knot, while the other half hangs freely behind his back, and Lokeshvara's characteristic emblem of an antelope skin is draped over his left shoulder. He wears a long skirt or dhoti as a lower garment, with an apron of embroidered silk above, and a long silk scarf that entwines around his upper body and billows out on either side of his lower body.