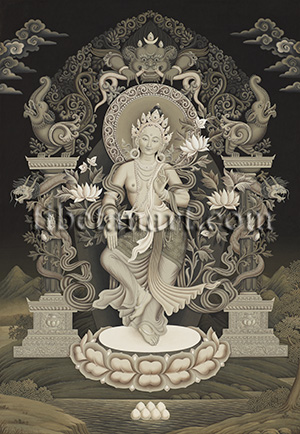 In this sepia monochrome painting by Devendra Man Sinkhwal, Green Tara stands in tribhanga or 'triple-bend' posture, as she gracefully dances upon the white moon-disc that rests within her double-lotus pedestal, with her right foot slightly raised. With her right hand lowered she makes the open-palmed boom-granting varada-mudra of supreme generosity. And with her raised left hand held before her heart she makes the abhaya-mudra of dispelling fear as she holds the stem of an immaculate white lotus, which blossoms at the level of her left ear. She is beautiful and youthful like a sixteen-year-old, with two firm breasts, a sweetly smiling face, and two compassionate lotus-like eyes.

She wears the precious metal ornaments of a five-jeweled crown, fastened with a headband of silk ribbons, and with pearl loops hanging over her forehead. Her earrings are round, and she wears a neck-choker with two strands of pearl necklaces hanging below. A square Newar medallion on a silver chain forms her long necklace, while her bracelets, armlets and anklets are all fashioned from gold, as is her belt which is adorned with hanging loops of pearls. Her long black hair hangs freely behind her back, and her topknot is crowned by a radiant wish-granting gem. As garments she wears a long silk underskirt, an embroidered upper skirt, a sash that loops over her left shoulder, and a long silk scarf that billows around her shoulders, arms and lower body.

Her halo is embellished with scrolling motifs, while her aura is decorated with entwining lotuses, leaves and stems. The two pillars that support the upper arch of her torana ascend from two ornamental stone bases, with treasure-vases carved upon their central panels, while leafy-tendrils and a pair of fierce jewel-clutching dragons coil around each of the fluted pillars. Upon the stone capstone of each pillar stands a ferocious makara or 'water-monster', each with an ornate swirling tail, which together form the upper arch of her torana. Crowning Tara's torana is the ferocious head and arms of Cheppu or kirtimukha, the 'face of glory', who as the elder brother of Garuda was born and half-formed from the first of two eggs that his mother prematurely hatched. As the sworn enemy of serpents, Cheppu devours the heads of the two naga-serpents that he grasps with his hands, while his fierce demonic and horned face is crowned by a crescent moon and three precious jewels.