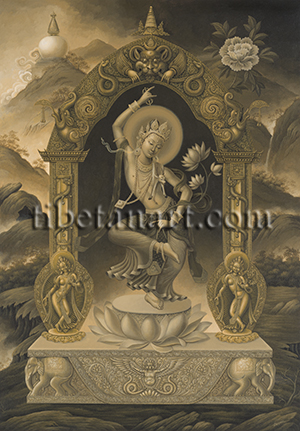 Vajranatha, meaning the 'Vajra-Lord', appears as one of the hundred-and-eight manifestations of Avalokiteshvara in the Newar Buddhist pantheon. He stands gracefully in triple-bend posture (Skt. tribhanga) as he dances upon the moon disc of an immaculate open lotus, with his right foot drawn up and his left leg extended. Vajranatha is blue in colour, beautiful and serene, with two bow-shaped eyes and a sweetly smiling face. He wears divine silk garments on his lower body, with a long billowing silk scarf draped around his upper body, and Lokeshvara's deer-skin emblem is draped over his left shoulder.

His body is adorned with exquisite jewel ornaments; his five-jewel crown and his jeweled belt are strung with hanging loops of pearls, and his earrings, necklaces, bracelets, armlets and anklets are fashioned in the traditional Newar style. With his right hand he holds aloft a golden five-pointed vajra directly above the crown of his head, and with his left hand he holds the stem of a triple-blossoming lotus at the level of his hip.

Vajranatha's moon and lotus pedestal rests upon the plinth of an ornate throne, with its magnificent back-support or torana ascending behind him. The throne's façade is ornamented with the central image of a serpent-grasping garuda with outspread hands and wings, with an elephant adorning the plinth at either end. Standing in dance posture at either side of Vajranatha are the sculptural forms of White Saptalocana or 'seven-eyed' Tara (right) and Green Arya Tara (left), both of who appear with their right hands making the varada-mudra of supreme generosity and their left hands holding the stems of their lotus flowers.

Ascending behind the ornate auras of these great female bodhisattvas are the symmetrical columns of Lokeshvara's torana, their two central pillars entwined with jewel-grasping dragons. The angled capitals of these columns support the arched upper torana, which is embellished with the traditional Newar motifs of two makara or 'water-monsters', and the crowning serpent-devouring head of Cheppu or kirtimukha, meaning the 'face of glory'. The makara have ornate scrolling tails, raised trunks, and jewel crests with little hanging bells that protrude from their ferocious mouths. While the mask-like head of Cheppu devours two serpents with his feathery hands, while his fierce face is adorned with horns, a crescent moon and a crowning jewel emblem.

The eyes of all these mythical creatures and of the two dancing forms of White and Green Tara are depicted without pupils to heighten the sculptural effect of Vajranatha's beautiful throne and torana. An ornate banner or parasol floats above Lokeshvara's torana, and the background landscape is composed of ascending rock formations and hills, with a Newar stupa and a lotus blossom appearing in the upper area of this lovely composition.