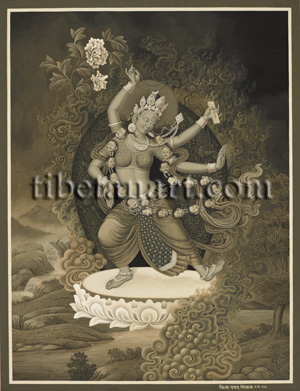 Bhairavi, meaning the 'Terrifying', is the fifth of the ten Mahavidya or 'Great knowledge' goddesses, and has many different forms. In this sepia composition she appears here in her auspicious four-armed aspect as Sampatpradha Bhairavi, or 'She who bestows good fortune'. She is described as being erotic and youthful like a sixteen-year-old, with four arms, three piercing lotus-like eyes, and a radiant red complexion like the rising sun. Her breasts are firm and full like water-pots, and are often described as being smeared with fresh blood. She has a sweetly smiling face that reveals her perfectly white upper teeth, and her forehead is marked with a small crescent moon.

Bhairavi stands on her white moon-cushion and lotus seat in dancing posture, with her right leg bent and her left leg extended as she gazes downwards to her left in tribhanga or 'triple-bend' posture. She wears the red garments of an upper bodice and loincloth of embroidered silk, a silk underskirt, an ornately woven apron, and a long billowing scarf that entwines around her upper body. Half of her hair hangs freely behind her back, with the other half bound up into a topknot and crowned by a white crescent moon. She wears the traditional gold and silver Newar ornaments of a jewel-topped five-skull crown; earrings; bracelets, armlets and anklets; an ornate neck choker, a chained medallion, a jeweled belt with hanging loops of pearls, and a garland of severed heads that are strung together on two fine chains.

With her lower right hand she makes the boon-granting varada-mudra or gesture of supreme generosity, and with her lower left hand she makes the abhaya-mudra of dispelling fear. With her upper right hand she holds a rosary of ruby-red beads, and with her upper left she holds a manuscript or sacred text. Her dark inner aura is adorned with tantric attributes, skulls, flowers, flames, clouds, real and mythical creatures, which is encircled by a blazing mass of awareness-fire, with billowing smoke appearing in the lower landscape.