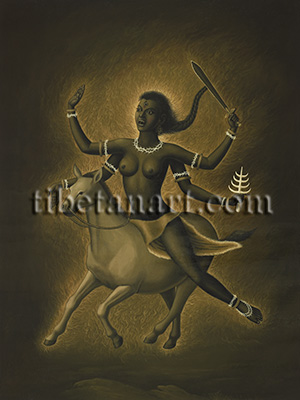 Kalaratri, meaning the 'Dark Night', is the seventh of the nine aspects of the great Hindu goddess Durga, who is worshipped over a ten-day period in an annual autumnal festival known as Durga Puja in India, and Dashain in Nepal.
This festival commemorates Durga's ultimate victory over the terrifying shape-shifting buffalo-demon Mahishasura, with the nine aspects that Durga assumed during this battle (Navadurga) being worshipped on each of the festival's nine consecutive nights (Navaratri).

In appearance Kalaratri is the most wrathful of Durga's nine manifestations, who as a ferocious mother-goddess was the slayer of Raktabija, the 'blood-drop' demon, who could spontaneously recreate clones of himself from every drop of his blood that fell to the ground during battle. Kalaratri's function is to annihilate all obstacles and obstructions, avert all malevolent planetary influences, and vanquishes all demonic ghosts and spirits, such as bhutas, pretas, rakshasas pishacas, daityas, danavas and asuras. She is also known as Shubhankari, the 'giver of goodness', who bestows courage upon all her devotees and protects them from all fears, such as the fear of darkness, fire, water, enemies and wild animals.

Kalaratri is extremely terrifying and blue-black in colour like the darkest of nights, with four arms and three eyes. She has a fierce expression and a mass of disheveled black hair that either hangs behind her back, or is bound up into a single braid, as she appears here. Her three round and piercing eyes shine like lightning, a ferocious wind emanates from her nostrils, and her gaping mouth reveals her sharp white teeth and canine fangs. Her naked body is beautiful and youthful like a sixteen-year-old, with two firm round breasts and four arms.

Tongues of fire emanate from and illuminate her form as she rides through the darkest of nights. Her vehicle is a wild grey ass or donkey with rope reins and a tiger-skin saddle that folds back over her pubic area in this composition. As ornaments she wears bracelets, armlets and anklets fashioned from gold, along with bracelets, armlets, anklets, foot ornaments and a neck choker fashioned from twisted and sharp white thorns of the poisonous datura plant. With her lower right hand she makes the boon-granting varada-mudra as she bestows powers or siddhis on her devotees, and with her upper right hand she makes the abhaya-mudra of protection or granting refuge. With her lower left she holds a white thorn-like weapon with nine sharp hooks or pointed tines, and with her upper right hand she wields a sharp iron sword or a sacrificial cleaver marked with an eye.

The nine forms of Durga that are consecutively worshipped during the nine nights of Navaratri are relate to the nine planets. These are: 1. Shailaputri (Moon); 2. Brahmacharini (Mars); 3. Chandraghanta (Venus): 4. Kushmanda (Sun); 5. Skandhamata (Mercury); 6. Katyayini (Jupiter); 7. Kalaratri (Saturn); 8. Mahagauri (Rahu); 9. Siddhidatri.