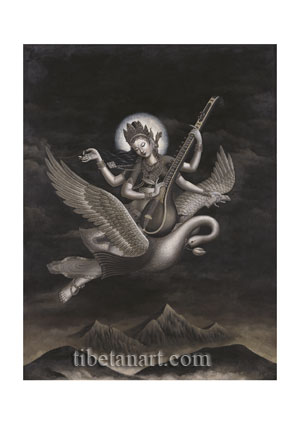 Sarasvati flying on her Swan

Sarasvati flying on her Swan :

This lovely oil painting by Devendra Man Sinkhwal depicts the Goddess Sarasvati flying across the night sky upon her vehicle, a magnificent white swan. Devendra's skilful use of black, white, and yellow-ochre oil pigments to create the sepia effect of a nocturnal landscape is enhanced by the luminous form of the goddess herself, who appears here like a 'being of light'. The distant clouds that shroud the upper sky are lit by the central orb of Sarasvati's halo, which shines like the full moon upon the cloud-capped foothills and distant Himalayan peaks below her.

Sarasvati is an important goddess of wisdom, knowledge, and learning of the arts and sciences within both the Hindu and Buddhist traditions, where she is particularly associated with the study of music, dance, drama, painting, sculpture, oration and writing. In the Hindu tradition she is the consort of Brahma, and in Buddhism she is the counterpart of Manjushri. The name Sarasvati essentially means the 'Flowing One', and as a goddess she personifies the great Sarasvati River of ancient India, which was highly venerated in the earliest Sanskrit texts of the Rigveda. This important river is believed to have dried up or disappeared underground about 5000 years ago, after which the River Indus with its famous Indus Valley Civilization became India's next great cradle of early Indian Vedic culture.

Sarasvati sits upon the back of her great white swan, with her left leg drawn up and her right foot extended. She is beautiful, peaceful and youthful like a sixteen-year-old, with a sweetly smiling face, two eyes and four arms. She wears lower garments edged with embroidered silk, a silk upper bodice, a jeweled belt with hanging pearl loops, golden earrings, bracelets, armlets and anklets, and an ornate five-jeweled crown. Around her neck she wears the traditional Newar ornaments of: a heavy golden choker adorned with the serpent-devouring head of Kirtimukha or Chepu; a lozenge-shaped golden tayo crowned with nine small naga-serpents that hangs from an ornate metal strap; two long pearl necklaces; and a silver chain that bears a square medallion or heart-ornament. Some of her long black hair is piled up into a topknot, while most of it billows outward in entwined strands towards her right.

With her first pair of hands Sarasvati gracefully plays upon her six-stringed vina, and with her second pair of right and left hands she holds her other two attributes of a rosary and a sacred text. The feathered wings of her powerful swan beat rhythmically against the night air, and its head is turned back to face Sarasvati as it holds the offering of a lotus bud in its beak.