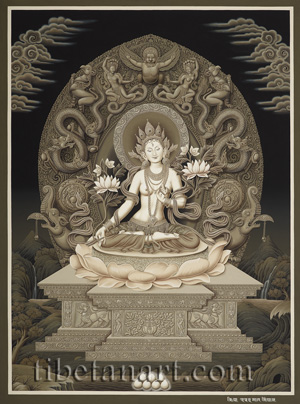 White Tara (Skt. Sita Tara) is also known as Saptalocana Tara, the 'Seven-eyed Saviouress', and along with Amitayus and Ushnishavijaya she appears as one of the three principal Buddhist deities of longevity. Her meditational practices are mainly employed to confer long-life, alleviate illnesses, and to remove the obstacles that are indicative of an untimely death. Thangkas of White Tara and the 'Trinity of Long-Life Deities' are frequently commissioned for such purposes, and also to auger an auspicious rebirth for a deceased relative or friend.

White Tara sits gracefully in vajra-posture upon her moon disc, lotus seat and enlightenment throne. She is youthful and beautiful, with full breasts and a sweetly smiling face. Her radiant white body is adorned with seven bow-shaped eyes; with the three eyes of her face representing the perfection of her body, speech and mind; and the four eyes in her palms and soles representing the 'Four Immeasurables' of her boundless compassion, loving kindness, sympathetic joy, and perfect equanimity. With her lowered right hand she makes the boon-granting varada-mudra of supreme generosity, while she gently holds the stem of an immaculate white lotus between her thumb and third finger. And with her left hand she makes the abhaya-mudra of protection or granting refuge, while she likewise holds the stem of another white lotus in front of her heart.

All of her silk garments and jewel ornaments are meticulously painted, with the minute image of Amitabha Buddha crowning the tip of her tiara's central jewel, and the serpent-devouring face of kirtimukha is embellished on her neck choker. Each decorative element of her jewellery is individually shaded, with a skilful use of background shadows creating a vivid impression of luminosity upon her pearls and finely embossed metal ornaments.

The central panel of her lion-throne shows the relief of a longevity vase full of amrita or nectar, which is sealed with the scrolling tendrils of a wish-granting vine. On either side of this vase are vertical panels that show the forms of two dancing goddesses, who each grasp the branch of a wish-fulfilling tree with their upraised hands. Enhanced by shadows the throne's outer facade displays the symmetrical forms of the paired lions that guard each of the four sides of her throne, collectively representing the 'Eight Close Sons' or great bodhisattvas. In the panels on either side of these jewelled lions are the symmetrical forms of standing garudas, each of which devours a pair of entwined serpents. The plinth and lower steps of her throne are embellished with symmetrical pearl, scrolling tendril, lotus flower and petal motifs. The upper cornices are similarly decorated with rows of pearls and petals, with the scrolling roundels of its central cornice containing small images of swans, elephants and a deer.

A ring of pearls and scrolling motifs encircles Tara's halo, and behind her back ascends her elaborate torana or enlightenment throne, the design of which is based upon the magnificent gilded 17th century 'Golden Gate' of Bhaktapur's Durbar Square in the Kathmandu Valley. The figure of a garuda with outstretched wings and arms crowns this torana, with his talons grasping the coils of a naga and nagini. Both of these male and female naga-serpents appear in human form, with their long serpentine tails extending from the base of their spines. And each is crowned with a canopy of five small serpents, which represent the five different castes of these guardians of the underworld. Below the naga and nagini are jewel-grasping dragons, and above the coils of each dragon is a rearing griffin or garuda-lion. Two ferocious makaras or crocodiles guard the base of the torana, with their jewelled and blade-like tongues supporting hanging bells. The swirling tail of each makara spirals upwards into an elaborate roundel that merges with the complex scrolling background of the torana, which is embellished on its outer edge by a separate frieze, and on its inner edge by a ring of pearls that defines the shape of her aura. The eyes of all the mythical creatures upon her throne and torana are depicted without pupils to emphasize the effect of hammered metal or carved stone. The dark background landscape of this painting depicts billowing clouds, mountains, trees, rocks and waterfalls. Below Tara's throne appears an offering of seven jewels, which represent the seven possessions of a chakravartin or 'universal monarch'.

This exquisite composition of White Tara was painted by Devendra Man Sinkhwal in 2006, and is based upon his earlier composition of Green Tara, which was painted in 2005. Only black, white and yellow-ochre pigments were used to create the vivid three-dimensional effect and sepia tonality of this painting.