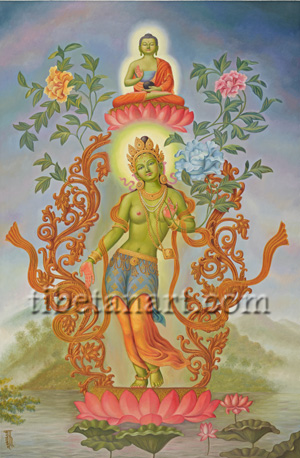 This oil painting shows Green Tara standing gracefully in triple-bend (tribhanga) posture upon the flat pericarp or seed-head of a pink lotus, which rises above the water of a lotus-lake. The flat plane of the seed-head, along with the mist-shrouded hills in the background, defines the horizontal plane of this composition, such that the face of Tara and Amoghasiddhi above appear to be monumental in perspective.

Green Arya Tara, the goddess of compassion and salvation, is beautiful, peaceful, radiant, and emerald green in colour. She is youthful like a sixteen-year-old, with a sweetly smiling face, and two lotus-like eyes. Her onyx-black hair is piled up into a topknot above her five-jewel crown, with curved strands hanging freely down her shoulders and back. Her breasts are firm and round, her waist is narrow, and she wears a long billowing red silk scarf around her shoulders and upper body, a yellow silk underskirt, and an embroidered upper skirt of blue silk brocade. Her golden belt has an embossed buckle or medallion, and is adorned with hanging loops of golden beads. She wears two pearl necklaces and the golden ornaments of: jeweled earrings; bracelets, armlets and anklets; an ornate neck choker, and an square Newar 'heart-ornament' that hangs on a golden chain.

The stems of two stylized golden vines define the shape of Tara's outer aura, enclosing her luminous inner aura and radiant halo. These golden-red vines appear like scrolling 'makara-tails', with clusters of leaves and tendrils curving gracefully outward from their main stems. From the top of these vines ascend the leafy stems of a yellow and pink lotus, which blossom at each side of Amoghasiddhi above. With her lowered right hand Tara makes the boon-granting varada-mudra of supreme generosity. And with her left hand she makes the abhaya-mudra of giving refuge in front of her heart, whilst holding the stem of a blue utpala lotus that blossoms at the level of her ear.

Amoghasiddhi Buddha, the 'Lord of the Karma or Action Family', is the male counterpart and consort of Green Tara, and he appears in raised perspective above Tara's halo. Amoghasiddhi is green in colour, and he sits in vajra-posture upon a pink lotus, wearing the dull red robes of a Buddhist monk. He is endowed with the thirty-two major and eighty minor marks of an enlightened Buddha, and golden light radiates from his noble body. With his raised right hand he makes the abhaya-mudra of fearlessness, and with his left hand resting upon his lap in the dhyana-mudra of meditation he supports his blue alms-bowl.