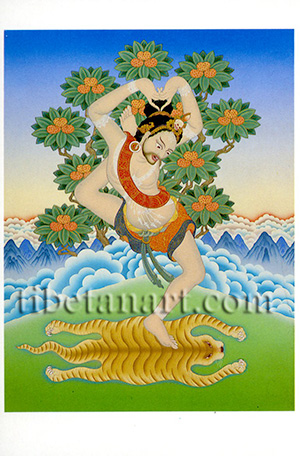 MINIMUM ORDER OF SEVEN 6" x 4" MIXED POSTCARDS PLEASE! The term mahasiddha, meaning 'great-accomplished one', is commonly applied to a yogin or yogini who has attained both a profound realization and psychic powers. Traditionally a group of eighty-four mahasiddhas are recognized in the Indian Buddhist tradition; and these great tantric practitioners, who lived between the 8th and 12th centuries, are the enlightened beings who first revealed the Buddhist Tantras.

Jalandhara, the 'net-bearer', was one of these eighty-four mahasiddhas, who having renounced worldly life decided to live under a tree in a charnel ground, where he received teachings on the yidam deity Hevajra from a female practitioner or dakini. After seven years Jalandhara succeeded in attaining realization through the yogic practice of dissolving his dualistic awareness into the median or 'central channel', which ascends through the subtle body to the crown of the head. In the Hindu tradition he is also revered as one of the nine Nath Siddhas, who instigated many of the hatha-yoga systems. He is shown here standing upon as tiger-skin in a specific yoga posture known as jalandhara-asana, and he wears the loincloth, meditation belt, skull-topped crown, and bone ornaments of a tantric yogin.