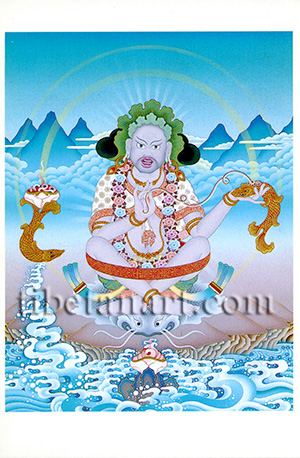 MINIMUM ORDER OF SEVEN 6" x 4" MIXED POSTCARDS PLEASE! The story of Luipa, the 'fish-gut eater', appears as the first legendary figure in the biographies of the eighty-four Buddhist Mahasiddhas. Luipa was born as a prince in the island kingdom of Sri Lanka, who became king when his father died. But so great was his revulsion to worldly life that he decided to renounce the throne and become a homeless yogin. He wandered widely across India, receiving many teachings and attaining great insight from his spiritual practices, but his innate dignity and charm ensured that he experienced little difficult in begging for alms. One day he arrived in the north Indian city of Pataliputra, where he resided in a cremation ground as he began to practice the wisdom teachings he had received from a group of female practitioners or dakinis. Here, on one of his daily begging round, he encountered another powereful dakini that was working in a brothel, who gazed deeply into Luipa's eyes and said:

"The energies of your psychic centres are quite pure, but there remains a pea-sized impediment of royal pride in your heart. Remove it!"

Having said this she poured some putrid food into his begging bowl. In disgust Luipa walked away and emptied his food bowl on to the street, but the dakini called after him:

"How can you ever hope to attain realisation when you are so concerned about the purity of your food?"

This parting remark cut to the core of Luipa's discriminating and regal pride, so he resolved to live on the banks of the River Ganges, eating only the discarded entrails of fish that the fishermen had gutted. After twelve years of this practice he succeeded in eradicating his royal pride and attained the full realisation of Mahamudra.

Luipa is shown sitting cross-legged on a fish-skin with a meditation belt around his knees. He wears a large leaf upon his head as a protection against the sun, and he is adorned with a garland of flowers. He holds a gutted golden fish in his left hand as he pulls the fish's entrails out with his right hand. On his right side another golden fish leaps from the River Ganges bearing an offering of a skull bowl filled with fish entrails upon its tail.