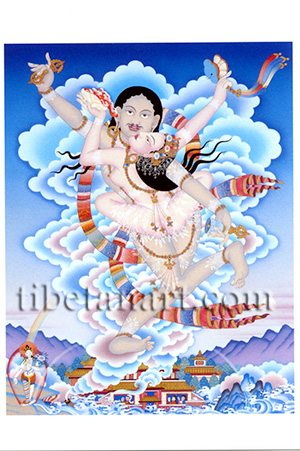 MINIMUM ORDER OF SEVEN 6" x 4" MIXED POSTCARDS PLEASE! Ghantapa, the 'bell-man', was a highly realized yogin who lived in eastern India during the reign of the ninth century king, Devapala. When Ghantapa refused to honour Devapala, the king chose to humiliate him by sending a courtesan's daughter to seduce him. This young girl first came to Ghantapa's hut as a servant, but over the course of time she began to sleep with him and soon gave birth to a child. Upon hearing this news Devapala came with many of his subjects to publicly ridicule this fallen yogin, and found Ghantapa holding his child in one arm and a pot of alcohol in the other. Enraged by the king's accusations Ghantapa threw the child and pot onto the ground, whereupon they immediately transformed into a vajra and bell, while a great flood began to arise from their impact. Grasping the vajra and bell, Ghantapa embraced his consort and flew up into the sky with her as they transformed themselves into manifestations of Chakrasamvara and his consort, Vajravarahi. In great repentance the king and all his subjects bowed down before Ghantapa, and by the power of their prayers the bodhisattva Avalokiteshvara appeared to stem the floodwater with his feet.