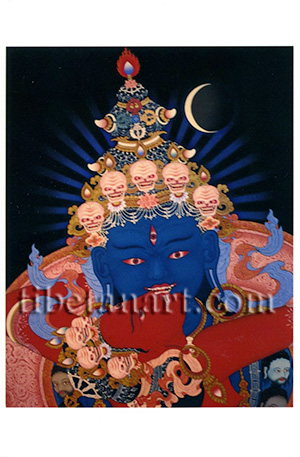 MINIMUM ORDER OF SEVEN 6" x 4" MIXED POSTCARDS PLEASE! Chakrasamvara (Tib: 'Khor-lo bDe-mchog) is an important semi-wrathful yidam deity belonging to the Highest Yoga Tantra class of deity practices. In this detail of his two-armed aspect Heruka Chakrasamvara is dark blue in colour, with one face and three bloodshot eyes. With his arms crossed he holds a vajra and bell as he embraces his red consort Vajrayogini, who also has two arms, one face and three eyes. The lips of the deity and his consort touch, and their mouths are partially opened to reveal their sharp teeth and fangs. Chakrasamvara wears a crown of five dry white skulls, symbolizing the ultimate emptiness or drying-up of the five aggregates. Each of these skulls is crowned with a different coloured jewel, symbolizing his attainment of the Five Buddha Wisdoms. His long black hair is piled up into two topknots, which are adorned with small nets of bone and crowned at the top with a blazing jewel. At the centre of his upper topknot is a crossed-vajra of five colours, which represents the Five Buddhas and the fivefold-activities of Tantra. A one-day-old crescent moon appears on the left side of his crown, symbolising the waxing or increase of his great bliss. He wears a garland of fifty freshly severed heads, and a protective 'vajra-scarf' is looped behind his neck. His red consort, Vajrayogini, also wears a crown of five dry white skulls, and has a bone wheel with eight spokes crowning the top of her head.