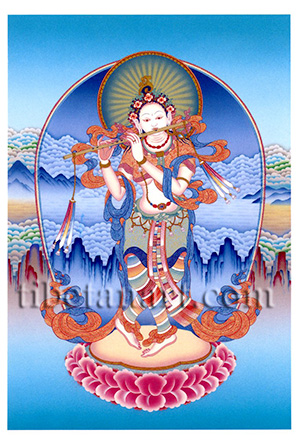 MINIMUM ORDER OF SEVEN 6" x 4" MIXED POSTCARDS PLEASE! Traditionally a group of either eight or sixteen offering goddesses are included in the retinues of many Buddhist deities. These offering goddesses are female bodhisattvas, eight of which offer: beauty, flowers, garlands, incense, song, light, dance, and perfume. These goddesses are commonly placed upon the raised red platform that surrounds the five-coloured walls of a mandala palace. When a group of sixteen goddesses are listed, four of them are goddesses of music: Vina (lute), Vamsha (flute), Mukunda (kettle-drum), and Muraja (double-sided drum). Vamsha is depicted here, playing on her bamboo flute. She dances upon a moon disc and lotus, and is adorned with the eight jewel and five silk ornaments of a celestial goddess.