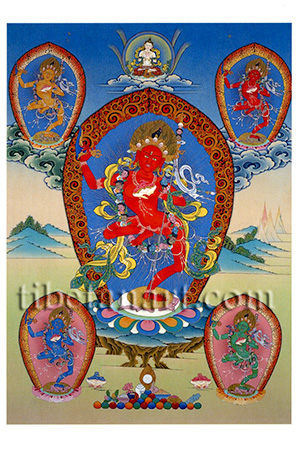 
Vajravarahi (Tib. Dorje Phagmo), meaning the 'Indestructible (vajra) Sow (varahi)', is a principal aspect of Vajrayogini, whose practice - both as a major yidam deity in her own right, and as the consort of Chakrasamvara - is of particular significance in the Tibetan Kagyu traditions. In this two-faced form she is also known as Indra's Dakini, whose lineage of transmission descends from Vajradhara to the early Indian king and mahasiddha, Indrabhuti, then later to Tilopa, Naropa, Marpa, Milarepa and the first Karmapa, Dusum Khyenpa. This thangka shows Vajravarahi at the centre of her five-deity mandala, with her retinue of four directional 'heart-dakinis' surrounding her.