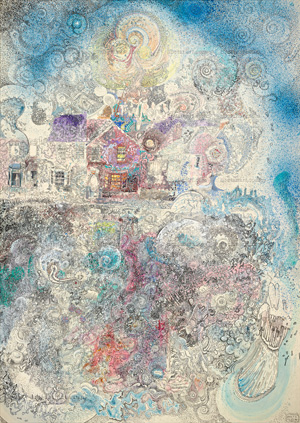 'Samsara' was the name John gave to his terraced house in Shirburn Road, Torquay, and this particular study is a view from the back window of his studio. This study is a pen and black Indian ink drawing on art board, with spattered blue ink particles from a small metal blow-spray covering much of the darkening evening sky. In other areas of this drawing coloured inks have also been used to glaze different areas of the composition, and some gouache has been used for other areas, such as upon the house with its illuminated yellow windows. The amorphous chaos in the lower half of the drawing is John's back garden, which he always tended with the enthusiasm of a seasoned English gardener, who knew both the Latin names and the peculiarities of all the plants that he cultivated.

I will no longer cheat my needs. All the things precious to me will be pursued. One's needs are directly reflected by natural behaviour. The falseness is never inherent - only the relative re-shaped assessment moulded by the Establishment - an organisation that devastates creative need and aspiration, and removes the rubble to heap on the toxic ethic of falseness.

My apparent 'sanity' of last year is now replaced by a more alarming and subtle destructive force, which threatens my whole mode of existence socially.

All my ideas and strong beliefs are anathema to society!!!

Yesterday I sat in the plush Mayfair cinema with scattered thoughts.
As I puffed my pipe on one cylinder the affluent man next to me muttered slyly and vitriolically. I made a remark expressing the wish that the smoke was not disturbing him.
"It is rather strong isn't it", he said.
"Well it is a simple matter of priority," I replied. "You see if I don't smoke it I become very violent!"
I had no more trouble after that.

Tonight I went to the Greek Taverna with Madame Rosina (the clairvoyant) for a special Greek night. I drank a small bottle of whisky to prime myself before leaving, and Madame Rosina and I consumed a vast amount of wine and she became drunk.

The belly dancer 'Zelda' was very good indeed. She danced well and was very sexy. She invited numerous men to dance with her, but all declined.

I felt very sorry for her and stepped out and performed. She removed my pipe and top and put a sequinned bra on me with a long skirt. We amused the audience for five minutes. Afterwards I spoke to her and she told me she had learned to dance in London. She thanked me for saving her!

Blackie is on heat. The tart!

I am alone on the rocks at Petitor beach. Blackie roves about happily. The gentle lapping sound of the sea, liquid against rock, is pierced by a sudden bark from the dog. I call her and she comes panting alongside me.

The sky is now grey but it remains pleasantly warm and an optimistic feeling that the sun could break through at any moment, prevails. I realise that I am completely at peace and the thought has come that even if it should rain I would be happy even though a long walk home and a soaking would follow.

The inner voices have become audible again; they comfort me. Three girls come into view. The need to paint and draw and work with clay fills me. It is a second rising tide, which flows through my veins as I sit a few feet above the physical sea. Children and youths have appeared and shout obscenities from the cliff-tops to the nudists on the other side of the beach. It really is very sad and pathetic. Now the three young girls join in the chorus and shout "Bender boy."

It is possible that they are now directing their attentions towards me. The content of their words is tediously repetitive. They are barren of vocabulary. Their goading continues interspersed between ever increasingly long silences.

Offshore three figures in a boat jerk their rods as if in answer to the suggestions that the crude girls are still making to the nudists.

It grows colder. My black Morrocan shirt waits for the sun. Fossils and rock indentations support my body. Minute shells shelter adequately in infinitesimal ridge cracks on the rock shelf.

A young authorative voice rings out, "Piss off".
There is a measured silence. No response.

Blackie wanders near the water. My awareness of things present and memories is intermittent. It has become difficult as I write to know what I am or should be concentrating upon. I feel as though the urge to write is ebbing.

Detumescent words shrinking to the size of the tiny shells; I can perceive them no longer.