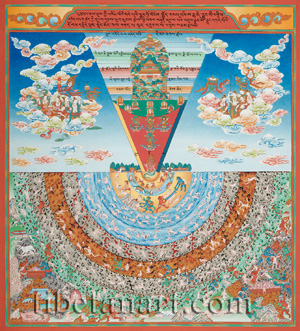 Cosmos According to Kalachakra Tantra

Cosmos According to Kalachakra Tantra :

NOTE: A similar unbrocaded thangka of this 'Cosmos According to the Kalachakra Tantra' by Sunlal is now available for sale. Priced at GBP £1,180.00.

This composition is the first in a set of four didactic mandalas that depict the outer cosmology of our universe according to the Kalachakra Tantra. The central horizon delineates the 'three worlds' of existence that are above, upon, and below the earth. The horizon itself represents the surface of the Earth, with the central island of buildings and trees representing our world system with its human and animal inhabitants. The upper half of the painting shows a side view of Mt Meru and its various ascending heavens or god-realms, while the lower half of the painting displays a semi-circular plan of the vast discs or mandalas of earth, water, fire, and wind that support our world system in the immensity of space. Warring asuras and aquatic nagas inhabit the first yellow and blue half of the earth mandala, while the second yellow half shows the first of the eight great hells or 'joyless realms', which is known as the hell of Gravel Water (Skt. sarkarambha). The second and third 'cold hells' appear in the two halves of the water mandala, and are known as the hell of Sandy Water (Skt. balukambha) and the hell of Muddy Water (Skt. pankambha. The two halves of the fire mandala contain the fourth and fifth 'hot hells', which are known as the hell of Intense Smoke (Skt. tivradhuma) and the hell of Fire