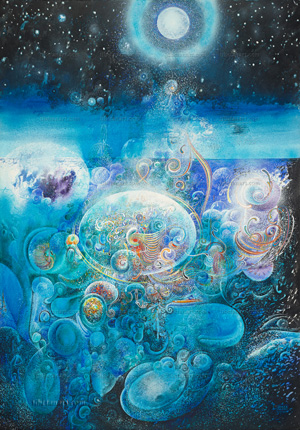 Oddicombe is a pebble beach in Torbay that was relatively close to John's house in Torquay, and this particular painting captures the stillness of a full moon over the sea, as seen from the cliffs above this beach. The stars of the night sky and the amorphous halo around the moon produce a soft nocturnal background for the brilliant glare of the lunar orb and its reflection across the water. The luminous shapes that populate the dark lower horizon of the painting echo the mysteries of creation with their organic and fetal forms, with the large sensuous egg at the centre appearing to be pregnant with cellular forms.

The act of painting is for me like the tide coming in over a beach.
Very slowly with occasional surges, the canvas becomes covered with an atmospheric veil of liquid intensity.
Shapes move within this tidal flow, some getting lodged in a particular place, as a covering of other forms leaves them peering through translucent layers.

On Friday 29th March I was very ill, not having slept since the previous Monday night. I had become extremely depressed and ended up on Friday night at Oddicombe beach trying to light a pile of pebbles with matches. Only after wasting a number of matches did I realise what I was doing and who I was, etc.

When I returned home at 9-00 pm. Carol had phoned several friends as she had been distressed about my condition and felt that I might be tired and unbalanced enough to be suicidal. When I came in Lyndon came over and was very kind to me. I recovered after a good night's sleep, but I was very concerned about having worried so many good people.

In the past, artists have synthesised the external world into a series of images both objective and transformative. Realising that the external world could give glimpses of a complete reality, their painting became analogous to gold prospectors panning for gold. The external world became the catalyst for the pure force of reality to rise up from the subconscious.

In work today reality is so often missing altogether! It seems to me that most art college courses make it impossible for students to ever find their own voice. The new academism is the most crippling and abortive in perhaps the entire history of man.

It is worthwhile to search forever and to find nothing; for this is a positive nothing!

But to find nothing, think it is everything and stop searching is not just to live in vain, it is to live a lie. A lie that grows in its own corruptiveness like a huge neon sign which only stops one seeing the stars.

Candlelight is beautiful. Microcosm or macrocosm, scale matters not. But do you crawl into a cave, light a candle and think it is the sun? Beware of thinking that you have seen the light, for you will be blinded by this light and see nothing, nothing at all. Not only will you see nothing, for each sense is only a fragment of experience, but you will negate every sense that you have.

If you believe in magic then you are real.
If you do not know magic you are not truly alive.
The unconscious has remarkable uniformity
Yet no two people are ever alike. This is magic!
And if you realize this then your whole body is alive.