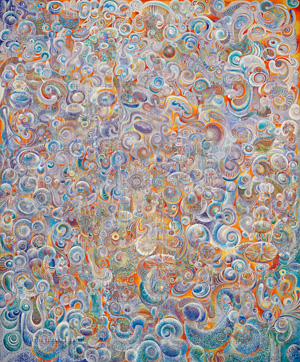 The Weaver of Dreams

The Weaver of Dreams :

The Weaver of Dreams painting is a 6 x 5 foot continuum of intricate and colourful cascading natural forms, which seem to float and drip in space like a dense shoal of luminous sea creatures or jellyfish. There are literally hundreds of interconnected passages in this composition that weave together like a series of dreams, each one leading into a separate reality, like a maze of parallel universes. In terms of technique this is expressionism taken to its sensual extreme, for the image literally drips what is in it. The Weaver of Dreams was the only painting that hung in the basement room that John always kept for me in his house in Devon, and below this painting was the 'dream bed', which also possessed its own consuming dreamscape and nocturnal presence.

I am becoming totally immersed in my drawing and painting. For years I have sought an undiluted commitment to my work. Ironically the despair of the past months has given my mind and soul the necessary re-alignment. Madness is near, but as long as my thoughts are clear enough to give continuous image projection, what does it matter? As long as I don't hurt anyone, for that is very important.

The day passed in blinding light. Night came on with a vast blanket of depression. Into the space that God puts in front of living things. I will go forward!

The painting, 6' x 5' upright, of the cascading forms is well underway. At present I am spending most of my time however on the figurative painting of the front room with wicker cane chairs.

A second layer of abstract forms is going on top. Several things have motivated me to try this. Firstly it 'lives out' an experience of five years ago when I was showing colour transparencies to my full-time students. The slides were of my paintings, but there were also several which I took in Morocco. One was of the fishing port of Essovira. Somehow I put two slides in the projector together and was confronted with a mandala painting superimposed on the Moroccan port. The impact was incredible.

The second 'pointer' was the book 'A Separate Reality' by Carlos Castaneda. This series of books coming into my life at this time has had a profound effect on me.

The third reason is despair.

The painting "Synaesthesia - The Weaver of Dreams" (6' x 5') is still progressing well. The painting of the front room is once again in suspended animation. I feel that soon I will 'know' how to complete it.

Tonight on Radio Three there was a most interesting program about Richard Dadd. I felt it frighteningly parallel to some of my thoughts. He feared his growing madness. Then went mad. So much for the stupid theory that madmen never realize they are mad!