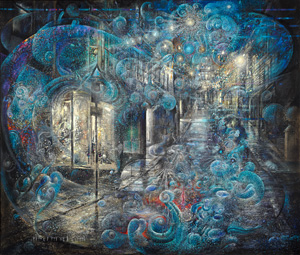 The Spirit of Totnes

The Spirit of Totnes :

The 'Spirit of Totnes' was one of John's most ambitious compositions, which he worked on over a period of seven years. He began this painting in October 1981, and late in 1988 he wrote: "I painted the signature off The Spirit of Totnes today. The signed part was totally ostentatious and interfered with the image." The painting is based on an early morning photograph of the deserted High Street in the town of Totnes in Devon, with a solitary car passing under the clock tower that bridges the wet street. The amorphous complexity of the luminous 'Spirit' energy that sweeps through the street reveals John's awareness of that which is present when people are absent. When John first showed me the completed painting he then switched of the studio light, leaving the image to gently glow in its spirit-presence as my eyes became accustomed to the dark. This visionary experience of the painting's virtual reality still remains fresh in my memory.

I went to London last Wednesday to see the Picasso at the Hayward Gallery. I also saw 'From El Greco to Goya' at the National Gallery and Kurt Schwitters at the Marlborough. I felt strangely subdued and a little empty as I strode around London. The force of Picasso's work got through to me. His 'Minotaur Series' moved me very deeply. The power of man the sexual monster, yet gentle with the sleeping woman.

My exhibition at the Imperial Hotel in Torquay came and went. This morning a letter from the bank - very overdrawn!!

It is now Saturday night. I have been painting for some hours, working on "The Spirit of Totnes". After keeping it in near monochrome with blacks, greys, blues, and white, I have just introduced some volcanic colour. Orange, red, yellow. Also blue-greens and violet-pinks. I seem to be settling into a mood of 'total' involvement with the painting. The word total is misleading. I can work non-stop on painting and not know this total involvement, on the other hand I can work intermittently and yet feel totally at one spiritually with image making.

I painted the signature off 'The Spirit of Totnes'. The signed part was totally ostentatious and interfered with the image. There is still a lot wrong with the painting, however I hope I am on the path to being reborn again as an artist.

Later in the evening a group of us go out drinking, and I invite them back to see my paintings after giving me a lift home. "Come in for coffee and see The Spirit of Totnes."

Sarah tires of my drunken witticisms in the car. She tries to excuse herself from coming in for coffee, wanting to be dropped off as she lives nearby. I suck my breath in and say, "Please come in just for five minutes, and glance at a year's work". Her father supports this.

They come in. I make them tea and Connie a coffee. Still they are hostile. Connie trying to charm them with my charm. Trying to introduce me as the seer, the prophet, and the master!

Suddenly they have their breath taken away. They realize they are looking at something special. 'The big-headed self-centred shit that sells himself crudely and overzealously can perform gentle magic'.

Sarah says, "Just to think there is all that rubbish in the Tate and here in Torquay there are paintings like this!"

The comment makes me glow, but soon they have gone.