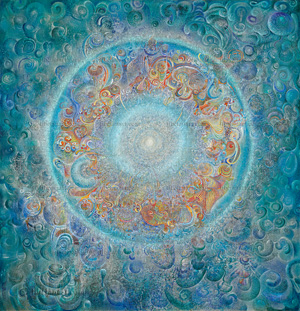 This delicate and extremely intricate mandala was painted by John Miles over a three-year period, and is certainly one of his finest works. He signed and dated this painting in 1980, giving it the provisional title of 'Celtic Renaissance'. This relates to his interest in a collection of ancient Welsh legends known as the Mabinogion that he was absorbed with during these. The title of 'Synaesthesia', meaning the 'crossing of the senses', was a prefix that John applied to all his major visionary works, and as a Giclee print in large format size this Mandala image is truly magnificent.

Most men sit dully, like sheep in a field, imagining that 'there's nothing to be done', that everyday reality is a kind of prison from which there is no escape except through drugs, drink or suicide. In fact the doors are open.

The beginning of his 'salvation' are the glimpses of freedom that come in times of crisis or in moments of sudden ecstasy.

I realise that there is either going forward - how far is unknown, or giving up!

I will never give up. I will fight on. I will fight to my last breath. I will try, and paint, and write. I will try to appreciate every moment of my waking consciousness and sleep. I will fight to get amazingly fit - able to walk long distances. Live a full life. Love everything. Never doubt. Never look back in regretfulness. Blake says that the five senses are the five windows that light the caverned man.

Each time I have a crisis and survive I come out stronger. I have been given a special opportunity to experience fantastic emotion. Ordinary daily routine, with health and everything else in equilibrium, never gives enough thrust to the purity of real creativity - which can only come from the sublimation of not pain, but excruciating agony. For it is I that am reborn in a mode of suffering guaranteed to squeeze out every ounce of my genius.


God has thrust me into the furnace
So that His Divine Fire can shape me
Into a more powerful instrument
Of visionary perception than would
Otherwise have been possible.
In this way He helps me to produce great art.


A realization has come to me that while I was in very good physical health with no heart problems, penetrating into the temple of pure art expression was all but impossible. If anyone had spelled out that at forty-eight I would have a totally wrecked heart and full loss of athletic ability, I would have found it almost impossible to conceive - when as a young man I stormed about the universe almost omnipotent!

Now that I have moments gripped with fear of my health I am able to attack the canvas with a purity and lack of inhibition previously impossible. I am aware, as the brush flashes like a rapier, that all the tightness is in my body - but the freed mind flashes onto the plain of the canvas oozing purity, and with an energy that is undimmed by any malaise that I might feel.

Cosmic energy joins and flows through me. It is very exciting and I crave as many years ahead as possible to get on with it.

Beyond Buddhism is a more embracing concept of the cosmos.
I realized it when I asked God to pray for me.