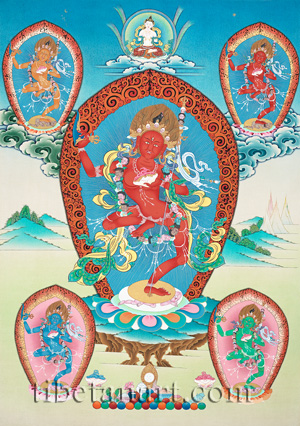 NOTE: A similar unbrocaded thangka of this composition, painted by the artist Dorje Tamang is now available for sale, Priced at GBP £990.00.

Vajravarahi (Tib. Dorje Phagmo), meaning the 'Indestructible (vajra) Sow (varahi)', is a principal aspect of Vajrayogini, whose practice - both as a major yidam deity in her own right, and as the consort of Chakrasamvara - is of particular significance in the Tibetan Kagyu traditions. In this two-faced form she is also known as Indra's Dakini, whose lineage of transmission descends from Vajradhara to the early Indian king and mahasiddha, Indrabhuti, then later to Tilopa, Naropa, Marpa, Milarepa and the first Karmapa, Dusum Khyenpa. This thangka shows Vajravarahi at the centre of her five-deity mandala, with her retinue of four directional 'heart-dakinis' surrounding her.

Vajravarahi is youthful, passionate, semi-wrathful and red in colour, with three piercing eyes. She stands in dancing bow-and-arrow posture, with her right foot drawn-up and her left foot pressing upon a golden sun and a corpse, which rest upon her white moon disc, multicoloured lotus, and the vajra-rock foundation beneath her. Her beautiful naked body is adorned with the five bone ornaments, a long billowing silk scarf, a garland of fifty freshly severed heads, and a garland of red karavira flowers. She frowns as she bares her sharp teeth and fangs, her tawny hair streams upward like fire, and she wears golden earrings and a five-skull crown.

Vajravarahi's black sow's head appears above her crown, with its fierce squealing face and sharp tusks representing her triumph over ignorance. Her two faces symbolize the union of relative truth (human face), and absolute truth (sow's face). With her raised right hand she holds a vajra-handled curved knife, which she circles towards the ten directions to overcome all maras or demonic obstructions. And with her left hand she holds a skull-cup full of blood in front of her heart, which represents the generation of great bliss. A tantric-staff or khatvanga rests within the crook of her left arm, which essentially symbolizes her inseparable union with her consort, Chakrasamvara. The khatvanga has an eight-sided white shaft with a half-vajra at its lower end; and a crossed-vajra, a nectar vase, a decaying green head, a fresh pink head, a dry white skull, and another half-vajra that crowns its top. A billowing white silk ribbon is tied around the neck of the golden vase; while from a separate golden thread hang the emblems of a small damaru, bell, sun, crescent moon, and a white yak-tail pendant. Light rays emanate from the inner-heat of Vajravarahi's blissful body, and she abides within a blazing aura of wisdom fire.

The four heart-dakinis of Vajravarahi's five-deity mandala are all identical to her in form and appearance, except that they each have a specific colour and stand upon the throne of a corpse, a golden sun disc, and a pink lotus. In the east (lower left) is blue Dakini; in the north (lower right) is green Lama; in the west (upper right) is red Khandaroha, and in the south (upper left) is yellow Rupini. Within the cloud-borne orb of rainbow light above Vajravarahi appears the white sambhogakaya form of Vairocana Buddha, who sits upon a moon disc and lotus with his two hands making the dharmachakra-mudra, or gesture of teaching. In the foreground landscape is a row of stacked jewels, with the eight auspicious substances appearing behind them. And to the left and right of these jewel offerings are skull-cups that contain swirling blue nectar (alcohol), and fresh blood.