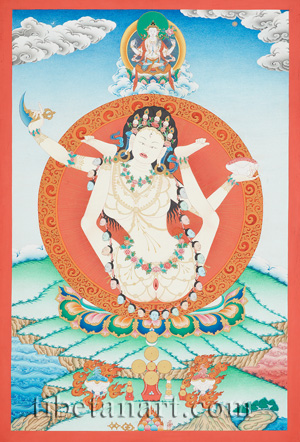 This thangka depicts the secret dakini aspect of White Khechari, whose practice is associated with the eleventh century Indian yogini Sukhasiddhi. Sukhasiddhi lived in Kashmir and was the kind but impoverished mother of six children. One day she gave the last of her rice away to a wandering beggar, and was chased away from her home by her own family. She then traveled to Uddiyana in the west of India, where she began to earn a living as a brewer of rice beer. And it was here that she gained the allegiance of a female disciple of the famous Indian mahasiddha Virupa, to whom she anonymously supplied free beer. When Virupa learned of Sukhasiddhi's kindness he summoned her to his forest hermitage, to which she came bearing offerings of beer and pork. Impressed with her great generosity, Virupa immediately bestowed some of his most profound teachings upon this kindly old woman, who was sixty-one years old at this time. It is said that Sukhasiddhi attained full realization on that very same night, and spontaneously assumed the guise and appearance of a beautiful young girl.

Sukhasiddhi and Niguma were the two main yogini teachers of the Tibetan master Khyungpo Naljor, the founder of the Shangpa Kagyu tradition, who considered Sukhasiddhi to be both his kindest teacher and his secret consort. The Shangpa Kagyu lineage is renowned for its unique highest yoga tantra doctrines, known as 'The Six Doctrines of Sukhasiddhi' and 'The Six Doctrines of Niguma'. In appearance Sukhasiddhi is traditionally depicted as a peaceful white yogini who holds a skull-cup and points to the sky, while Niguma is represented as a semi-wrathful brown dakini who holds a skull-cup, a damaru, and a khatvanga. The 'Five Golden Doctrines' of the Shangpa Kagyu tradition are: The Six Doctrines of Niguma (the Root); Mahamudra (the Trunk); the Three Aspects of Bringing to the Path (the Branches); White Khechari and Red Khecari (the Flowers); Deathlessness and Non Deviation (the Fruit).

White Khechari is as youthful and nubile as a sixteen-year-old, with an expression that combines the sentiments of passion and wrath. She floats in space with her legs spread wide and her feet lifted to the level of her ears, as she shamelessly reveals her aroused breasts and open red vagina. Her naked body is adorned with the dakini's five filigree bone ornaments, a garland of fifty freshly severed heads, and a necklace, belt, bracelets, armlets and anklets fashioned from small red flowers and leaves. The headband of her five-skull tiara is also adorned with red flowers, and loosened tresses of her piled-up black hair flow freely behind her back. She has three piercing eyes and her slightly wrathful mouth reveals her white teeth, four sharp fangs, and twisting red tongue. With her right hand she holds a vajra-handled curved knife, which she circles towards the ten directions to terrify all demons and maras. And with her left hand she holds a skull-cup full of blood. She abides within a circular orb of radiant red light with an outer ring of scrolling golden 'parawa' patterns, while her white moon disc and multicoloured lotus rest upon the triangular rock formation behind her.

In the sky above her is four-armed Sadaksari Avalokiteshvara, the embodiment of compassion, whose famous 'six-syllable' (sadaksari) mantra is OM-MA-NI-PA-DME-HUM. Below Khechari is a group of four tormas or sacrificial cake offerings, which are made from dyed butter and barley flour. Her principal torma is fashioned as a red cone with large golden discs, a white crescent moon and two triple-gem emblems; while her small auxiliary red and white tormas are ornamented with golden discs. On each side of the tormas are two flaming skull-cups mounted upon three small skulls, with the left skull-cup containing swirling blue nectar or alcohol, and the right one swirling red blood. The turbulent waters of the two lakes on either side of these offerings are also coloured blue and red to represent the male (method) and female (wisdom) energies. At the bottom centre is a pyramid of blazing jewels and the chakravartin's emblems of elephant tusks, coral, the queen's round earrings and the minister's square earrings.