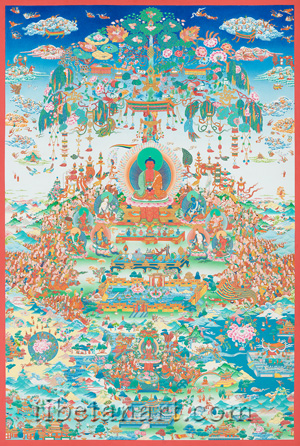 Amitabha, the red Buddha of 'Boundless Light', sits on his peacock throne at the centre of his western paradise of Sukhavati, the 'Blissful Realm'. Sukhavati is believed to be the only Pure Land that can be attained by those who are still progressing on the path to enlightenment, and devotees who attain to this realm are spontaneously reborn inside lotus flowers in the androgynous or 'sexless' forms of monks with golden bodies. Many of these monks can be seen in this painting being born from lotuses and sacred pools, flying miraculously through the sky, sitting upon rainbows, or mingling with the gods. In the beautiful landscape below Amitabha is the paradise of red Amitayus, the long-life deity of 'Boundless Life'. On either side of Amitabha sit four of the Eight Great Bodhisattvas, along with a vast assembly of Arhats, Bodhisattvas and disciples, with many gods that play musical instruments and hold various banners appearing behind. Above Amitabha's throne ascends the jeweled trunk of a great wish-granting tree, which bears countless auspicious objects that include: flowers, fruit, medicinal leaves, jewels, snow-lions, silk valances, garments, parasols, and many different kinds of banners and hanging offerings.

This elaborate Sino-Tibetan style thangka depicts Amitabha, the Buddha of 'Boundless Light', in his paradise of Sukhavati (Tib. Dewa-chen), the 'Realm of Great Bliss'. Amitabha Buddha is the 'Lord of the Padma or Lotus Family', who presides over the western direction where the Pure Land of Sukhavati is located. Amitabha represents the purified aggregate of perception, and the transmutation of passion into discriminating awareness. His colour is red, his symbol is a lotus, and he is associated with the element of fire, the summer season, the west, and evening twilight.

The text of larger Sukhavativyuha-sutra relates how long ago a monk named Dharmakara made forty-eight vows to the Buddha Lokeshvararaja, and of how over the course of time Dharmakara's great devotion led to his eventual enlightenment as Amitabha Buddha, who resides and teaches in the western paradise of Sukhavati. The earliest Indian sutras that relate to Amitabha date from the first century CE, which then began to gain popularity in China, Korea and Japan, where he is still widely worshiped as Amida Buddha. The 'four devotional causes' of these traditions are believed to create a karmic link to an imminent rebirth in the Pure Land of Sukhavati. These four causes are: a strong aspiration to be reborn in Sukhavati, the accumulation of merit, the cultivation of bodhicitta, and the dedication of merit. But the practice of phowa or 'transference of consciousness' is believed to be the most direct method for entering Sukhavati at the time of death, where devotees are spontaneously reborn within lotus flowers in male or 'sexless' forms with golden bodies.

Sukhavati is believed to be the only Pure Land that can be attained by those who are still progressing on the path to enlightenment. And here these fortunate beings dwell until they attain nirvana, abiding in an environment of Great Bliss, and remaining immune from all the sufferings of samsara.

At the centre is the nirmanakaya form of red Amitabha Buddha, who wears the three red monastic robes and a green under garment, and sits in vajra-posture upon a white moon disc, a pink lotus, and an ornate peacock throne. His hands rest upon his lap in dhyana-mudra as he holds an alms-bowl made from blue-beryl (Skt. vaidurya), and his radiant aura emanates rays of five-coloured rainbow light. On each side of Amitabha appear four of the 'Eight Close Sons' or great bodhisattvas, two of which - white Avalokiteshvara and blue Mahasthamaprapta (Vajrapani) - are Amitabha's principal attendants, and sit facing forward as they flank him to the right and left. Directly below Avalokiteshvara are red Samantabhadra, yellow Maitreya, and green Akashagarbha. And below Mahasthamaprapta are flesh-coloured Kshitigarbha, red Manjugosha, and white Nivarana-vishkambhin. All of these eight great bodhisattvas are adorned with divine silk garments and jewel ornaments, and are seated upon moon discs and pink lotuses.

Behind the bodhisattvas appears an assembly of thirty-six heavenly gods, fourteen of which hold aloft various auspicious banners, parasols and fans, while the remainder mainly play upon musical instruments. The two gods nearest to Amitabha wear peacock-feathered garments and fan him with their lotus-petal and peacock-feather fans. Below these celestial gods is a vast assembly of arhats, aryas, sravakas, pratyekabuddhas, bhikkhus and other bodhisattvas that have gathered from the ten directions in order to worship and present offerings to Amitabha. Many of these devotees wear monastic robes, while others wear the attire of kings and celestial beings. The bodhisattvas that appear in this assembly are variously coloured, and some wear peacock-feathered garments. Processions of these devotees can be seen approaching from the green hills on either side of the painting, while others are conveyed on rays of rainbow light. Another group is led by a yellow-hat lama that holds a longevity-vase, and amongst his retinue appear several disciples who wear the monastic hats of Mongolia and Central Asia.

Below Amitabha's peacock throne is a red table that bears sense offerings, such as perfume, flowers, incense, water, and a tray of jewels. And below this is a blue table that bears musical instruments, a mirror, wheel, conch and jewel, a bowl of fruit, and an alms-bowl full of curd. Also collectively appearing on both these tables are the 'seven insignia' of the chakravartin.

Below these tables is the main lotus pool of Sukhavati, where several monks can be seen taking spontaneously rebirth within lotuses. Islands, platforms, jewels and birds appear within this square pool, which has four directional gateways with gold, silver, beryl and crystal steps. The pool is enclosed behind jeweled walls, and surrounded by a grove of fragrant trees.

A range of cloud-capped and colourful hills separates the central plain of Sukhavati from the detailed foreground landscape, which is divided into variegated areas by rivers and colourful ranges of hills. Seated within a courtyard that is paved with green tiles and surrounded by a jeweled fence in the centre of this landscape is Amitayus, the 'Buddha of Boundless Life'. Amitayus is the long-life manifestation of Amitabha, who wears the divine silks and jewel ornaments of a sambhogakaya deity. Amitayus is red and sits in vajra-posture upon a moon disc, lotus and cushioned throne, with his hands resting in dhyana-mudra as he holds a golden longevity-vase full of immortal nectar. He is encircled with lotuses, crowned with a parasol, and attended by an assembly of monastic devotees that bear auspicious offerings, and heavenly gods that play upon musical instruments and hold a parasol, a peacock fan, a victory banner and a yak-tail banner. In front of Amitayus appears his circular lotus-pool, with fragrant trees surrounding the fence of his courtyard.

In front of the courtyard gate is another square lotus-pond, which has jeweled steps, jeweled walls, and a boardwalk that leads to a central pavilion. Along the bottom of the painting are jeweled palaces, pavilions, rivers, hills, and many different species of medicinal trees. Within this beautiful landscape appear all kinds of miraculously created objects, auspicious symbols and attributes, such as banners, conches, silk robes, vases, flowers, and bowls filled with fruit, gemstones, nectars, medicines and other precious substances.

Upon the yellow plain to the left grows a vast pink lotus that radiates golden light rays against its circular blue aura, and within these light rays appear the partial forms of monks who are being spontaneously reborn in Sukhavati. On the blue plain to the right is another great lotus of spontaneous rebirth, and below this is another square lotus-pool where monks debate beneath the square silk canopy of its central platform. Many other fortunate monks, divine beings, birds and animals appear amidst the heavenly landscape of Sukhavati, with its countless groves, pavilions and bridges, its scented air, musical breezes, and rainbow light. Some sit in contemplation or make prostrations, while others carry offerings, receive teachings, walk together, bathe, or leap blissfully into the sky.

The central horizon depicts distant hills that recede into the lower brightness of Sukhavati's infinite and clear blue sky, where many colourful cumulus clouds bear assemblies of the celestial gods. Levitating monks, peacocks, birds, an enthroned Buddha (left), and a gandharva palace (right), appear in the lower sky. The first three cloud formations that ascend on each side are inhabited by gods that rain down jewels, fruit, flowers, nectar and other auspicious offerings, many of which are adorned with billowing silk ribbons. Some of these gods hold golden bowls, vases, coral branches, and silk cloths laden with jewels, while others hold jewel-disgorging animals. A banner (left) and a parasol (right) appear beneath the fourth level of clouds above, which are populated with gods that hold aloft various banners, flags, parasols and fans. The gods on the fifth level of clouds hold various silk rolls, ribbons and banners, and they pour down offerings of jewels, nectar, gold and vermilion powder. Most of the gods on the uppermost cloudbanks appear in the form of gandharvas, the celestial musicians and dancers of the gods, and in front of each divine assembly floats a square silk canopy. In the dark upper sky appear fourteen flying monks and gods, who blissfully soar through space with their shawls and silk scarves billowing behind them.

Ascending behind Amitabha's rainbow aura is his magnificent bodhi-tree, which is always in flower and laden with all manner of auspicious offerings. The roots, trunk and branches of this tree are made of the seven precious gemstones; gold, silver, beryl, crystal, coral, red pearls and diamonds. Its variegated canopy of fragrant leaves, flowers and delicious fruits are made from the same precious substances, which when moved by the gentle breezes produce sweet and harmonious sounds. Radiant jewels and the emblems of the chakravartin manifest within many of the different leaf clusters and flowers. White snow-lions and red makaras guard the branches, and at the ends of the lower branches are scrolling golden crests.

The lower trunk of the bodhi-tree is encircled by a golden 'bracelet', from which hangs a net of jewels. Above this hangs a square silk canopy that is tied to the branches with green ribbons, and adorned with hanging silk valances, and silver bells with red yak-tails attached to their clappers. Above again is an ornate golden bracelet adorned with earrings; a four-faceted jewel in an oval golden mount; a golden knot; and a blazing eight-faceted gem that arises from the heart of a lotus.

Many golden bracelets and looped-threads encircle the four main branches of the tree, from which hang various jewel-nets, silk parasols and canopies, embroidered garments of multicoloured silks, and eight long banners. The two outer banners are fashioned as nets of jewels that hang upon golden threads. The next two banners have five hanging silk parasols, with a jewel, a silver bell, and a red yak-tail pennant at their bases.

The third banner on the right is fashioned from three carnelian gzi stones that hang on a golden thread, with the emblem of a golden sun upon a white crescent moon, and a yak-tail pennant at its base. And the fourth banner on the right is adorned with a white parasol with long streaming ribbons, and the hanging emblems of a golden swastika, six white conch shells, two golden crest bars, a four-faceted gem, and a silver bell with a red yak-tail pennant.