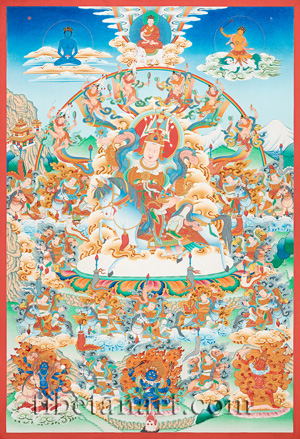 This thangka depicts Gesar, the legendary king who ruled over the eastern Tibetan Kingdom of Ling about a thousand years ago. The Gesar epic is believed to be longest narrative poem in existence, which, although not compiled into any definitive textual form, probably consists of more than a million verses. Various oral traditions of the Gesar legends are still extant throughout many areas of Central Asia, Mongolia and Tibet, with the shamans or mediums that recite these long ballads from memory often receiving these transmissions through dreams or trance states.

The essential narrative of the Gesar epic usually begins with the early history of Tibet's three great Buddhist kings and Padmasambhava's subjugation of the country's native spirits, which he oath-bound to serve as protectors of the Buddhadharma. But many of these wrathful and unruly spirits remained antagonistic to the advent of Buddhism, and later offered their allegiance to some of Tibet's most ruthless and despotic kings.

It was in order to subdue these demonic forces that the great hero, Gesar Norbu Dradul, was divinely born into this world with the given name of Joru. The young Joru had an older brother named Gyatsa, and two uncles named Sanglun and Trotun, who all figure prominently in the Gesar epic. Sanglun is courageous, kind and wise, and his younger brother Trotun is cowardly, cruel and treacherous.

Because of his wild behavior young Joru and his mother are forced into exile in the deserted northern land of Ma. But when Joru is twelve years old they both return to the kingdom of Ling, where Joru competes in a horse race to win the hand of a beautiful maiden named Brugmo, the daughter of a neighboring chieftain. Joru wins the race, marries Brugmo, and assumes the name of Gesar when he ascends to the throne of Ling.

As king, Gesar then embarks upon military campaigns against the four enemies of the four directions, the first of which is against Lutzen, the twelve-headed cannibal demon of the north. But when he returns from this long campaign he discovers that Kurkar, the demonic king of the neighboring land of Hor, has abducted his wife. So on his second long campaign Gesar invades the kingdom of Hor, eventually kills Kurkar, and retrieves his wife, Brugmo. Gesar's other two campaigns are against the King of Jang in China, and against the King of Mon in the Himalayan border area of Tibet. After these great victories Gesar then goes on to defeat many other enemies of Buddhism, which in some legends include the invading armies of Islam.

The Kingdom of Ling is usually identified with Kham in eastern Tibet, where Gesar's army was based within a semi-nomadic yak-hair tent encampment, and governed by thirty heroic military generals and thirteen great Buddhist protectors. Then finally, at the end of a very long and eventful life Gesar miraculously ascended to the heavenly realm from whence he first came.

The upper landscape of this thangka shows the famous 'Tiger's Lair' Monastery in Bhutan on the left, and Mount Amnye Machen on the right. Amnye Machen, which is Tibet's second highest (6282 meters) and most sacred mountain, is located in Amdo province of Eastern Tibet. A rainbow arches across the sky between these two sacred sites, with six beams of rainbow light radiating outwards from behind Gesar to unite with its arc. Upon these beams are three dancing 'heroes' (dakas), and three dancing 'heroines' (dakinis). The male dakas wear tiger-skin loincloths with white flags above their heads, and they each hold a shamanic drum and a wooden striker. And the female dakinis wear silk skirts with rainbow-coloured trousers, and they each hold a damaru and a bell.

Gesar appears on his celestial blue steed at the centre of this composition, which usually is brown in colour, but in this Karma Kagyu thangka is here depicted as pale blue in colour. This horse is adorned with all manner of divine silk and golden trappings, as he prances amidst swirling clouds upon a white moon disc and a multicoloured lotus. In a posture of royal-ease Gesar sits sidesaddle upon the ornate silk saddlecloth of his blue horse, which bears the name of Khyung-ko kar-kar, the 'fair white-skinned garuda', and is endowed with the thirty-two major marks of a heavenly steed or windhorse.

Gesar is flesh-coloured and slightly wrathful, with two arms and two piercing eyes. He wears golden armor and a golden helmet with a central blue jewel, which is crowned with six triangular flags and a victory banner. His breast is adorned with a golden wheel, and he wears various billowing and voluminous silk garments, some of which are fringed with leather or crocodile skin. His golden sword and bow are sheathed at his left side, and he holds a golden bowl filled with gems in his left hand, while with his right hand he holds an iron discus or chakra with eight sharp triangular blades.

Surrounding the vajra-rock upon which Gesar's vast multicoloured lotus rests is his retinue of thirteen protector deities, who all appear as flesh-coloured warriors mounted upon blue or brown steeds. They are all adorned in similar golden armor and silk garments, with red yak-tails crowning their golden helmets, and each carries the attribute of a spear-flag with a fiery iron tip and a long billowing triangular silk flag or banner.

In the lower left corner is the wrathful protector goddess Shri Devi (Tib. Paldan Lhamo) in her aspect as Rangjung Gyalmo, the 'Self-manifesting Queen'. She is extremely fierce and blue-black in colour with four arms, and she rides her mule across an ocean of blood amidst a maelstrom of wind and fire. In her two right hands she wields a trident and a ritual dagger, and in her two left hands she holds a divination mirror and a serpent-noose.

In the bottom centre is four-armed Mahakala, who sits upon a corpse throne, sun disc, lotus and vajra-rock formation, with a fiery skull offering of the five sense organs appearing in front of him. Mahakala is extremely wrathful and blue-black in colour, and he abides amidst a blazing mass of fire holding the attributes of a curved knife and a sword in his two right hands, and a skull-cup and trident in his two left hands.

In the lower right corner is the goddess Ekajati, the 'one hair-lock', who is the principal female protector of the Nyingma tradition. She is extremely wrathful and reddish-brown in colour, and stands amidst a blazing mass of fire upon a corpse, sun disc and lotus. She has one piercing eye, one pointed tooth, one sagging breast, and her tawny hair is twisted upward into a single lock. Her naked body is adorned with bone ornaments, a collar of clouds, and she wields the torn-out heart of an enemy in her left hand, and a club made from a mummified corpse in her right hand.