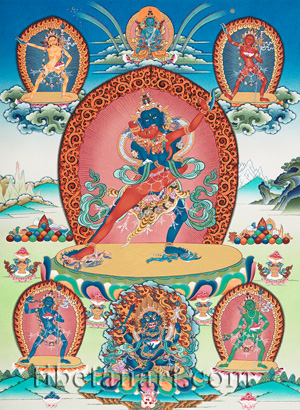 This composition shows the five-deity mandala of two-armed Heruka Chakrasamvara in his 'innate' (sahaja) aspect as Sahaja Chakrasamvara, who is semi-wrathful, blue-black in colour, with one face, two arms, and three eyes. He stands in alidha posture upon a golden sun disc and a multicoloured lotus, with his left foot pressing upon the head of black Bhairava, and his right foot pressing upon the breasts of red Kalaratri. Bhairava, the 'terrible', and Kalaratri, the 'dark night', are the wrathful aspects of Shiva and Parvati. With his two arms crossed before his heart he embraces his red consort, Vajravarahi, whilst holding a vajra and a bell in his right and left hands. His long black hair is bound up into two topknots, which are adorned by a crescent moon, a variegated crossed-vajra, and a blazing wish-granting gem. He wears a five-skull crown, the six bone ornaments, a loosened tiger-skin loincloth, a garland of severed heads, and a patterned vajra-scarf that encircles his upper body before billowing around his lower body in the form of a green silk scarf. He bares his sharp teeth, his majestic body displays the 'nine dramatic sentiments', and a scrolling arc of blazing wisdom fire encircles his radiant red aura.

His consort Vajravarahi is red in colour, with one face, two arms, and three eyes. In the bliss of sexual union she presses her naked body against her lord, with her extended left leg pressing against his, and her right leg wrapped around his waist. She wears golden jewelry, the five bone ornaments, a five-skull crown, and a garland of fifty white skulls. With her left arm she embraces the neck of Chakrasamvara as she holds a skull-cup of blood behind his neck, while with her right hand she circles aloft a vajra-handled curved knife.

Surrounding Chakrasamvara are the four directional 'heart-dakinis' that form the retinue of his five-deity mandala, who would traditionally appear on the four cardinal petals of his two-dimensional mandala. Each of these four semi-wrathful 'essence' or heart-dakinis has two arms and three eyes, and stands in alidha posture upon a golden sun disc and lotus amidst an aura of wisdom fire. Their naked bodies are adorned with the five bone ornaments, a five-skull crown, and a garland of severed heads. They each hold a vajra-handled curved-knife in their right hands, a skull-cup of blood in their left hands, and a trident-topped khatvanga staff that is supported by their left arms. In the east (lower left) is blue-black Dakini. In the north (lower right) is green Lama. In the west (upper right) is red Khandarohi. And in the south (upper left) is yellow Rupini.

Surrounding Chakrasamvara's lotus throne are four golden vases with white skull-cups on top of them, which would traditionally appear on the four inter-cardinal petals of his two-dimensional mandala. Each of these golden vases is adorned with a silk ribbon and rests upon a white moon disc and lotus. And the white skull-cups contain different nectar offerings for each of the four sense goddesses of sight, smell, taste and touch.

Seated amidst the clouds and rainbow light at the top centre is blue Akshobhya Buddha, the 'Lord of the vajra Family' to which Chakrasamvara belongs. And at the bottom centre is four-armed black Mahakala, who serves as the protector of this mandala in the Kagyu tradition. Mahakala is extremely wrathful, and sits upon a corpse seat, sun disc, lotus and vajra-rock formation amidst a blazing mass of fire. With his first two hands he holds a curved knife above a skull-cup full of blood, and with his second pair of hands he holds aloft an iron sword and a skull-topped trident.