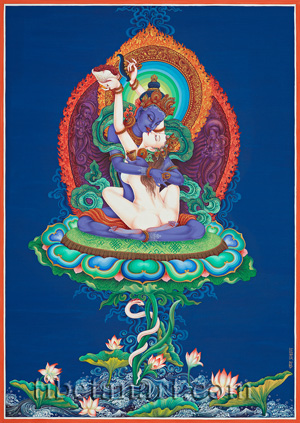 This painting depicts blue Vajradhara, the 'Holder of the vajra', in union with his white consort, Vajrayogini. Vajradhara is the Primordial Buddha of the sarma or 'new-translation' schools (Sakya, Kagyu, Gelugpa) of Tibetan Buddhism, while Samantabhadra is the Primordial Buddha of the nyingma or 'ancient-translation' school of the Nyingma tradition. Vajradhara and Samantabhadra both represent the direct source from which many of the Tantras and their lineages of transmission originate, and are thus the only two Buddhist deities that represent the dharmakaya. For even though Vajradhara is traditionally represented in sambhogakaya form, he is recognized as the 'Sixth Buddha', or the pristine source from which the Five Enlightened Families actually emanate. Vajradhara is also recognized as the form that Shakyamuni Buddha assumes in order to reveal the Tantras, and within the various Kagyu traditions he is especially venerated as the progenitor of their main lineages of transmission.

Vajradhara's deep blue colour represents his unchangeable and space-like nature as the pure expression of the dharmakaya. He is endowed with the thirty-two major and eighty minor marks of a fully enlightened Buddha, and adorned with the divine silk and jewel ornaments of a sambhogakaya deity. He sits with his legs loosely crossed in lotus-posture upon the patterned golden disc or seed-head of a multicoloured lotus that arises from a lake. His silk loincloth is loosened for sexual intercourse, and he wears a long green silk scarf that billows around his upper body. He wears bracelets, armlets and anklets of both gold and filigree bone, a heavy golden neck choker and earrings, a five-jeweled crown, and a golden vajra that adorns his topknot. With his right arm crossed over his left arm he embraces his consort while holding a golden vajra and an upturned bell in his right and left hands. These two attributes represent the union of his method or skilful-means (vajra) and wisdom (bell).

Vajrayogini, his white consort, sits with her legs wrapped around Vajradhara's waist as she presses every part of her body against his in the bliss of sexual union. She is naked and wears only the golden ornaments of a five-jeweled crown, earrings, bracelets, armlets, anklets, and finger rings. Her long hair flows freely down her back as she gazes into the eyes of Vajradhara, with her lips held close to his. With her raised arms she embraces Vajradhara's neck as she holds aloft a skull-cup full of blood in her left hand, and a vajra-handled curved knife with her right hand.

Vajradhara's inner aura is decorated with the forms of two naga-serpents that each hold conch shells in their cupped hands, while the outer golden ring of his colourful halo is decorated with two makaras and the crowning head of kirtimukha. His aura and halo are both encircled with a blazing ring of fire, and his lotus-throne rests upon a large convoluted leaf that arises from the turbulent waters of a lotus-lake. A white naga-serpent coils around the long stem of this lotus, and behind the stem are clouds that billow upwards into the blue background of the sky.