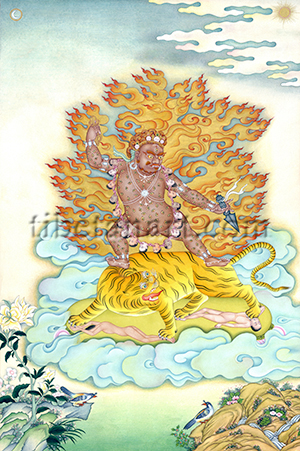 Dorje Drolo (Skt. Vajra-lambodara), the 'Pot-bellied Vajra', appears as one of the eight manifestations of Padmasambhava or Guru Rinpoche, where he assumed this ferocious tiger-mounted form in thirteen different 'tiger's lair' locations across Tibet and Bhutan in order to subjugate the most wrathful and arrogant demons that dwelled in these places. And as a powerful yidam or meditational deity in his own right his practices are of special important in the terma or 'hidden-treasure' traditions of both the Nyingma and Kagyu schools. He appears here in his 'multiple-eyed' (Tib. tsig-dun) rare terma aspect, in a composition copied from a 19th century thangka in the Shelley and Donald Rubin collection in New York (item No. 298). This copy was commissioned by my friend Marc Baudin from one of the finest Indian miniature painters in Jaipur, and is painted in pure natural and mineral pigments on the traditional composite paper that is still used by the artists of Rajasthan.

Dorje Drolo is extremely fierce in appearance, maroon in colour, with two arms, two legs, and one face with three round red eyes. His penis stands erect and his naked pot-bellied body is endowed with countless round staring eyes that cover every part of his body and gaze outwards in all directions. He is adorned with the six bone ornaments, and a long garland of fifty freshly severed heads that are strung together through their mouths on a coiling thread of intestines. His tawny hair-locks curl upwards above his five-skull crown, his red facial hair blazes up like fire, and he bites down on his lower lip with his sharp upper teeth and fangs. With his right hand he wields aloft a wrathful five-pointed golden vajra with open prongs, and with his lowered left hand he raises his forefinger in the threatening tarjani gesture as he thrusts his sharp phurba (Skt. kila) or ritual-dagger towards the heart of a demonic enemy. This triple-bladed phurba is made from black meteorite iron, and its knurled handle is bound with a white silk ribbon.

He abides in a blazing mass of wisdom fire, gazing to the left as he leans towards the right in standing pratyalidha posture, with his two feet firmly planted on the back of a fierce lactating tigress. This tigress is an emanation of Guru Rinpoche's Indian consort, Mandarava, who gazes up towards Dorje Drolo as she crushes underfoot the prone forms of two enemy-demons with her sharp claws. These naked figures lie facing upward and downward upon the golden sun-disc of Dorje Drolo's lotus pedestal, which is encircled by a drifting mass of billowing blue-grey clouds. The beautiful rock and landscape formations in the lower left and right corners are adorned with delicate flowers and shrubs, where two colorful and crested birds gaze at one another.