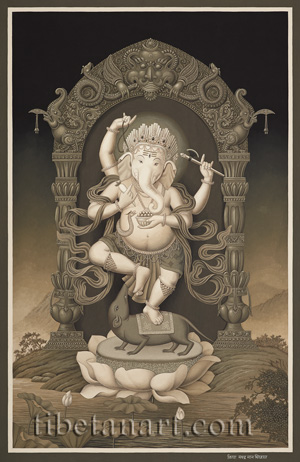 In this sepia painting four-armed Ganesh (Ganapati) is shown dancing in tandavi or bow-and-arrow posture, with his right leg drawn up and his left foot resting upon the saddle-cloth of his vehicle, a long-nosed Asian shrew or chuchundra. The shrew gazes upward at Ganesh, with its four feet resting upon the seed-head of a lotus that arises from a lake.

Ganesh's stout and pot-bellied white body is adorned with a floral-patterned loincloth with a pleated apron, a long billowing silk scarf, and a pleated turban-like headdress. He wears golden ornaments, a five-jeweled crown, and a serpent circles his chest and stomach as a sacred thread. Around each of his shins he wears little spherical 'dancing bells' (Skt. ghungharu), which are used in classical Indian dance and in the Newar charya-nritya sacred dance traditions. Traditionally up to seventy-five bells are used for each leg, and these bells are sewn onto crescent-shaped sections of felt, which are then bound around the shins or ankles with ribbons.

The lower landscape of this painting shows buds and leaves arising from the lotus-lake, with bushes, rocks and hills behind. Ganesh is enshrined within an architectural arch or torana, the lotus-ornamented and eight-sided pillars of which ascend from the apertures of two longevity vases. Upon the ornate upper arch of this torana stand two makara or 'water-monsters', with long scrolling tails and blade-like tongues that support little bells. And crowning the top of Ganesh's torana is the fierce horned and serpent-devouring head of Cheppu or kirtimukha, the 'face of glory'.