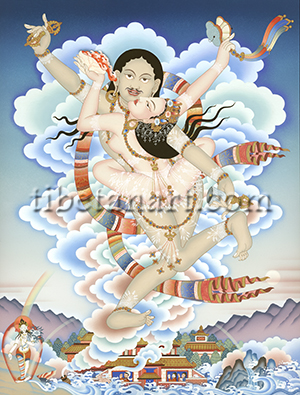 Ghantapa, the 'Bell-Man', is listed as the fifty-second of the Eighty-four Mahasiddhas, and is especially recognized in Tibet for his transmission of the 'five limbs' of the Panchakrama Chakrasmamvara lineage, which he received directly from Vajrayogini, the consort of Chakrasamvara.

Ghantapa's legend relates that he was a highly realized yogin who lived in eastern India during the reign of the ninth century king, Devapala. However, when Ghantapa refused to honour Devapala, the king decided to humiliate him by sending a courtesan's beautiful young daughter to seduce him. This young girl first came to Ghantapa's hut as a servant, but over the course of time she started to sleep with him and over the course of time gave birth to a child. Upon hearing about this King Devapala came with many of his subjects to publicly ridicule this fallen yogin, and found Ghantapa holding his new-born child in one arm and a pot filled with alcohol in the other. Enraged by the king's accusations Ghantapa threw the child and pot onto the ground, whereupon they instantly transformed into the ritual attributes of a vajra and a ritual bell, while a great flood began to arise from their impact with the ground.

Grasping the vajra and bell in his right and left hand, Ghantapa embraced his consort and flew up into the sky with her as they transformed themselves into manifestations of Chakrasamvara and his consort, Vajravarahi. In great repentance the king and all his subjects bowed down before Ghantapa, and through the power of their prayers the Avalokiteshvara, the bodhisattva of compassion manifested in order to stem the floodwater with his feet.