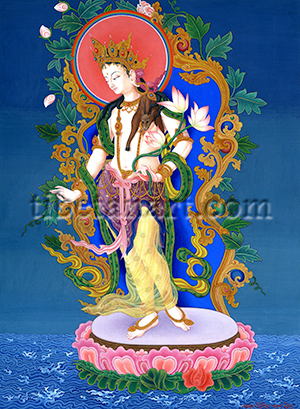 This beautiful depiction of White Padmapani was painted in 1998 by the brilliant Newar artist Dinesh Charan Shrestha, who now teaches the techniques of paubha painting in Berkeley, California. Painted in a Botticelli-like style this composition is a mirror-like image of his Red Padmapani that was painted at the same time, and these two white and red depictions of Avalokiteshvara are the two most important forms of this bodhisattva of great compassion in the Newar Buddhist pantheon.

White Lokeshvara is venerated as Karunamaya or Seto Matsyendranath, the 'White Fish-lord', in the Newar Buddhist tradition and his temple, known as Janabahal, is located in the ancient heart of Kathmandu city. As a rain-bringing deity of longevity, fertility and abundance his four-day Spring festival takes place in the last month of each Nepali year, when his iconic white image is laboriously pulled in a towering wooden chariot around Kathmandu's streets. In a week-long Winter festival his four-foot white image, flanked by his smaller attending deities White and Green Tara, are taken out into Janabahal's large courtyard and are ceremoniously bathed, repainted and clothed before being reinstated in his temple shrine, where both Buddhist and Hindu devotees continually receive his blessings.

Framed paintings of the hundred-and-eight forms of Avalokiteshvara are hung above the square outer walkway of the Janabahal temple, which were drawn in the 1960's by the great Newar artist Siddhimuni Shakya. Small gilded repousse images of these 108 forms of Lokeshvara also adorn the outer walls of this temple, though sadly some of these images have been stolen in recent years.

White Padmapani is radiant and white in complexion like an autumn moon, and as youthful as a sixteen-year-old, with two arms, two gentle bow-shaped eyes and a sweetly smiling face. In 'triple-bend' posture he stands gracefully upon a silver moon disc above an open red and orange lotus that floats within a large enclosing green leaf above the gently lapping waters of an ocean. In profile he leans towards the right, with his lowered right hand gracefully making the boon-granting varada-mudra of supreme generosity, and with his left hand at the level of his hip he holds the stem of a lotus that blossoms into three immaculate pink blossoms as it curves towards his shoulder.

He wears the eight jewel and gold ornaments of a sambhogakaya deity: with an ornate tiara studded with radiant gems; bracelets, armlets and anklets: a belt strung with loops of golden jewels; an ornate neck-choker, and a chained golden necklace adorned with precious gems. Half of his long black hair is piled up into a top-knot, while the other half hangs freely about his shoulders and back, and Lokeshvara's characteristic emblem of an antelope skin is draped over his left shoulder. As garments he wears a long transparent red skirt of gossamer silk adorned with gold motifs, and above this an upper-skirt or apron of embroidered silks that is tied with a long flowing belt of pinkish silks. A long scarf of embroidered green, yellow and orange silk entwines around his arms and upper body, then gracefully billows out on either side of his lower body. His deep blue inner aura and orange halo is encircled by an arabesque outer aura of jewels encased in scrolling tendrils, with deep green leaves and pinkish buds appearing against the dark night sky behind.