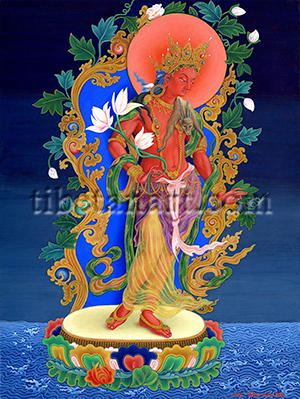 This graceful depiction of Red Padmapani Lokeshvara was painted in 1998 by the brilliant Newar artist Dinesh Charan Shrestha, who now teaches the techniques of paubha painting in Berkeley, California. Painted in a style like that of Sandro Botticelli this composition is a mirror-like image of Dinesh's White Padmapani that was painted at the same time, and these two red and white forms of Avalokiteshvara are the two most important aspects of this bodhisattva of great compassion in the Newar Buddhist pantheon.

Red Padmapani is radiantly red in complexion, as youthful as a sixteen-year-old, with two arms, two gentle bow-shaped eyes and a sweetly smiling face. In 'triple-bend' posture he stands gracefully upon a golden sun disc above an open multicolored lotus that floats within a large enclosing leaf above the gently lapping waters of an ocean. In profile he leans towards the left, with his lowered left hand gracefully making the boon-granting varada-mudra of supreme generosity, and with his right hand at the level of his hip he holds the stem of a lotus that blossoms into three immaculate white blossoms as it curves towards his shoulder.

He wears the eight jewel and gold ornaments of a sambhogakaya deity: with an ornate crown or tiara studded with radiant gems; bracelets, armlets and anklets: a belt strung with loops of golden jewels; an ornate neck-choker, and a chained golden necklace adorned with precious gems. Half of his long black hair is piled up into a top-knot, while the other half hangs freely about his shoulders and back, and Lokeshvara's characteristic emblem of an antelope skin is draped over his left shoulder. As garments he wears a long transparent red skirt of gossamer silk adorned with gold motifs, and above this an upper-skirt or apron of embroidered silks that is tied with a long flowing belt of yellow and white silks. A long scarf of embroidered green and red silk is entwined around his arms and upper body, then gracefully billows out on either side of his lower body. His deep blue inner aura and orange halo is encircled by an arabesque outer aura of jewels encased in scrolling tendrils, with deep green leaves and pinkish buds appearing against the dark night sky behind.

Red Lokeshvara is venerated in the Newar Buddhist tradition as Rato Machhendranath, or Rato Matsyendranath, meaning the 'Red Fish-lord'. As the principal bodhisattva of red Amitabha Buddha, he assumes special importance as the bringer of rain that irrigates the Kathmandu Valley's abundant crops of rice, grains, and vegetables. Known in Newari as Bunga Dyah, the various legends of his origins and activities are manifold, and arose after his five-foot red wooden image was brought to Nepal from Kamarupa in Assam by King Narendra Dev in the 7th century, to bring an end to a twelve-year drought.

He is the only Newar deity that spends six months of each year in two different temples, one in the centre of Lalitpur (Patan City), and the other in the village of Bungamati, about four miles to the south of Patan. His annual chariot festival, known as Rath Jatra, takes place in April or May and last for four weeks, where his image is installed in a towering forty-foot high wooden chariot and pulled by ropes on a circuit of Patan, resting at various locations overnight.