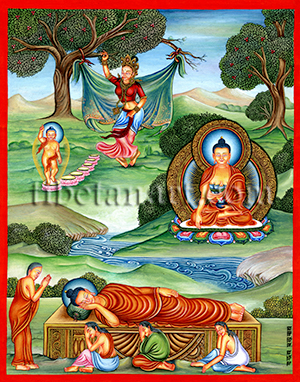 This small painting by Ujay Bajracharya depicts the three principal events in the life of Gautama Buddha or Shakyamuni - his birth, enlightenment, and his final passing into Parinirvana. These events are traditionally commemorated in the Buddhist festival known Wesak, Vesak, or Buddha Purnima, which falls annually on the full-moon of the Indian lunar month of Vesakha in May or early June. In the Newar tradition of Nepal this festival is known as Buddha Jayanti.

The scene in the upper left illustrates the birth of the Buddha as Siddhartha Gautama. This took place when his mother, Mayadevi, was traveling from her palatial home in Kapliavastu, the north Indian capital of the Shakya Republic, to her parent's house where she planned to give birth to her child. However, feeling the onset of labour as she passed through a park near Lumbini, she alighted from her palanquin and grasping the branch of a sal tree, gave birth to the divine child from the right side of her body. Mayadevi is shown holding this branch with her right hand, with a silk sari spread out behind her to protect her from view. Immediately after his birth the baby took seven steps, with seven open lotuses miraculously appearing to support his feet, as he declared: “For enlightenment was I born, and for the good of all who live. This is the last time I will take rebirth into this world of becoming.”

The enlightenment of Shakyamuni Buddha, the “Sage of the Sakya Clan”, is shown at the right centre, where he sits in unshakeable vajra-posture upon the immaculate white moon-disc of a multi-coloured lotus. This occured beneath the sacred Bodhi Tree of Awakening at the site near to a river, now known as Bodh Gaya. Shakyamuni wears the three red robes of a bhikshu or monk and supports his blue alms-bowl with the palm of his left hand, while his right hand makes the 'earth-touching mudra' or gesture, as he calls upon Prithvi, the 'Vast-One' and Vedic 'Earth Goddess' to bear witness to his enlightenment. Light rays emanate from the Buddha's divine form, forming a golden aura around his body and a halo around the ushnisha or enlightened protuberance that crowns his head.

The bottom scene depicts the Buddha's Parinirvana, or nirvana-beyond-death, where an enlightened buddha is completely released from karma, the physical and mental skandhas or 'aggregates', and rebirth within the wheel of samara or 'cyclic existence'. In his eightieth year Shakyamuni passed into Parinirvana between two flowering sal trees near the ancient Malla town of Kushinagara in northern India. Here he lay down upon a couch in 'lion's posture' on his right side, with his head pointing to the north and his right hand supporting his head. His close disciple Ananda appears at the head of the couch with his palms joined in veneration, while in front of the couch three Malla women are mourning the Buddha's final passing into Parinirvana.