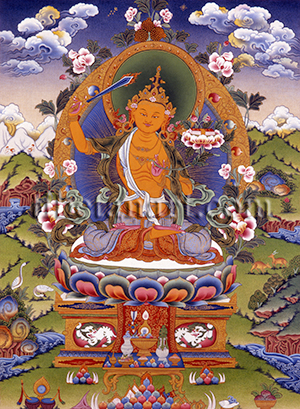 Manjushri (Tib. Jam-pa), meaning the 'Youthful' is the principal Bodhisattva of Wisdom in the Indo-Tibetan Buddhist tradition, and is also know as Manjugosha (Tib. Jam-yang), meaning the 'Gentle Voiced'. He appears here in his most popular form as Orange Arapacana Manjushri, whose name is derived from the five inner syllables of his mantra: OM A RA PA CA NA DHIH, with DHIH being the syllable from which he is visually generated.

Orange Manjushri is youthful, peaceful and beautiful like a twelve or sixteen-year-old prince, with a sweetly smiling face, two eyes, two arms, and a radiant saffron complexion that shines like refined gold. He sits in vajra-posture upon a white moon disc, multicolored lotus and an ornate golden throne that is supported on each of its four sides by a pair of white lions. He wears five garments of multicolored silks, the eight jeweled golden ornaments of a bodhisattva, and his long black hair is described as being piled up into five wisdom topknots above his five-jeweled crown. These five wisdom topknots of his pristine awareness relate to the five peaks of his heavenly abode at the sacred mountain of Wu-tai Shan in China.

With his right hand he holds aloft a flaming and sky-blue iron sword of pristine-awareness that cuts through the net of misunderstanding. With his left hand he holds the stem of a lotus in front of his heart, which blossoms at the level of his left ear and supports upon its open petals a text on the 'Perfection of Wisdom' (Skt. Prajnaparamita-sutra) in a hundred thousand lines or stanzas. He abides within a beautiful landscape, and placed before his lion-throne are assembled all manner of precious offerings.