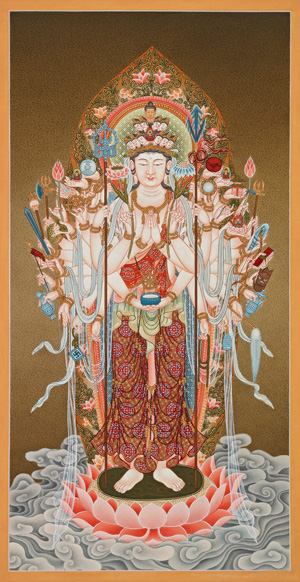 Avalokiteshvara in his Japanese form as Senju Kannon or Kuan Yin

Kannon is the name given to the various Japanese aspects of the bosatsu or great bodhisattva of compassion, who traditionally manifests in thirty-three main forms. These forms are often androgynous and relate to his male aspects as Avalokiteshvara , the 'Lord who Sees All' the sufferings of existence, or in her female aspects as Kuan Yin, 'She who Hears all' the cries of all beings.

In his male aspect as Senju or 'Thousand-armed' Kannon he manifests as the eleven-headed, thousand-armed and thousand-eyed aspect of Avalokiteshvara, the Indo-Tibetan Buddhist bodhisattva of great compassion, with forty-two principal attribute-holding hands and nine-hundred and fifty-eight smaller secondary hands. These secondary or 'branch-hands' are often not represented in the Japanese Buddhist tradition, where the deity often appears in sculptural forms and may either appear seated or standing posture.

Here Kannon appears standing upright upon the seed-head of an open pink lotus that floats upon an ocean of clouds. He wears a long lower garment of embroidered red silk with a folded upper apron and belt, a red sash that loops over his left shoulder, and various long and diaphanous silk scarf-like ribbons that descend from his crown and loop about his arms and lower body. He wears the golden ornaments of bracelets, a headband, a necklace, and a black-beaded eight-spoke golden wheel, with similar black beads looped about his lower body.

Six of his eleven small crowned heads appear above his gold headband, with the small image of seated Amida or Amitabha Buddha at the centre. Above are four similar heads with fierce and jovial expressions, and at the top is the crowning golden head of Amitabha. Kannon's complexion is radiant white like a full autumnal moon, with a sweetly-smiling face, two compassionate bow-shaped eyes, and long blue-black hair locks that hang freely over his shoulders and back. His halo and aura are encircled with an ornate frieze of vine-like scrolling tendrils and pink lotuses.


The principal eight of Kannon's forty-two arms are arranged symmetrically in front of his body. The first pair are palms-folded together in front of his heart as he makes the anjali-mudra of respect and veneration. With his second pair of right and left hands he holds aloft the stems of a pink lotus and a blue utpala or 'night-lotus', which both blossom at the level of his ears. His third pair of hands are joined together in the dhyana-mudra of meditation at the level of his hips as he supports his blue alms-bowl as a symbol of renunciation.

With his fourth right hand he holds the long sandalwood shaft of a khakkhara or Buddhist monk's staff, its ornate bud-shaped iron top is decorated with a stupa, lotus petals and six iron rings. This six rings serve as rattles to announce a monk's presence on his silent morning begging round, and to frighten away any snakes or small creatures in this path. Symbolically they also represent the six aspects in which Kannon manifests to help all beings in the six realms of existence (gods, demi-gods or asuras, humans, animals, hungry ghosts, and the hell realms).

And with his fourth left hand he holds the long red shaft of an iron trident, adorned with a silk ribbon. The three barbed prongs of this trident represent his triumph over the 'three poisons' of ignorance, greed and anger that lead to rebirth in the three lower realms of the animals, hungry ghosts, and hells, which in the didactic 'Wheel of Life' painting are symbolically represented by a pig, cockerel, and snake.

Kannon's remaining thirty-four attribute-holding hands radiate in a circle behind his body and his eight principal arms, with seventeen appearing on his right and left sides. From bottom to top on his right side his seventeen hands hold:

(1) a white rosary with a hundred-and-eight crystal beads.
(2) the sacred-seal of an auspicious swastika emblem.
(3) an open-handed palm making the varada-mudra of boundless generosity.
(4) a bird-headed flask filled with the nectar of immortal wisdom.
(5) an arrow, which coupled with his left-hand bow represents the union of wisdom and skillful means.
(6) an iron sword of discriminating awareness that cuts through all ignorance.
(7) a precious red sandalwood sutra-box or container of treasures.
(8) a vajra-topped skull club that destroys all demonic enemies.
(9) a vajra-marked axe that cuts through all ignorance.
(10) a bunch of grapes, representing the blessings of nature.
(11) a lotus bud, symbolizing the cultivation of compassion.
(12) an eight-spoke golden wheel or dharmachakra of the Buddha's Noble Eight-fold Path.
(13) a white cloud, representing the heavenly realms.
(14) a five-pronged golden vajra of method or skillful means.
(15) a silver ritual-bell of wisdom or discriminating awareness.
(16) an emanation image of Amitabha Buddha.
(17) a silver moon-disc marked with a nectar-filled vase.

And from bottom to top on his left side his seventeen hands hold:

(1) a lasso or rope-noose that leads beings towards liberation.
(2) a silver hand-bell, representing the female aspect of wisdom.
(3) a white yak-tail fly whisk that sweeps away all obstacles.
(4) a silver water-pot that pacifies the thirst of all beings.
(5) a lion-headed shield that protects against all demonic enemies.
(6) a bow, which coupled with the right hand arrow represents the union of skillful means and method.
(7) a sutra or sacred-text of the Buddhist teachings.
(8) a conch-shell that proclaims the sound of the Buddhadharma.
(9) an iron hook that binds all enemies and dispels ignorance.
(10) a blazing triple wish-granting gem, representing the trinity of Buddha, Dharma, and Sangha.
(11) a red lotus bud of compassion, love and purity.
(12) a sacred willow branch that cures all afflictions.
(13) a heavenly-palace, representing Dharmadhatu Mandala, one of the two principal mandalas of Japanese Esoteric Buddhism.
(14) a silver mirror that reflects and liberates all phenomenal appearances.
(15) a single-pointed golden vajra, with its tips representing the two mandalas (Womb-World and Vajra-World) of Japanese Buddhism.
(16) a nirmanakaya or emanation buddha image.
(17) a red sun-disc marked with the Chinese symbol of a three-legged crow, which illuminates darkness and heals afflictions of the eyes.