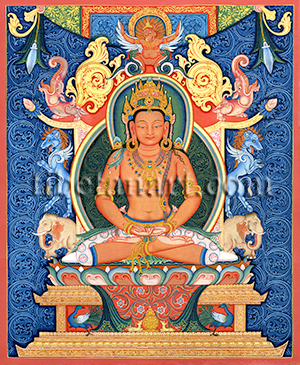 This small composition depicts the crowned sambhogakaya form of Amitabha Buddha in his long-life red aspect as Amitayus, the "Buddha of Infinite Life". Amitayus sits in vajra-posture upon his peacock throne, with his hands resting together upon his lap in the dhyana-mudra of meditation upon emptiness. He is endowed with the thirty-two major and eighty minor marks of an enlightened buddha, and his radiant red body is adorned with the eight jeweled ornaments of a sambhogakaya deity, including the long jewel garland that hangs over his left shoulder as a sacred thread. His short white loincloth is patterned with circular deer and swan motifs, and two billowing green silk ribbons are tied to his golden belt. His ornately jeweled crown ascends in three tiers with a wish-granting gem at its top, and two similar gems serve as clasps for his long black hair, which flows freely over his shoulders.

His golden throne is ornamented with striding peacocks that stand on either side of its central plinth, a small wheel and deer emblem appear at its centre, and an embroidered red and green silk veil hangs over its top. Above his throne are the multi-colored lotus seat and the white moon disc upon which he sits. His green halo and scrolling aura are encircled with arcs of rainbow light, and behind him appears the backrest or torana of his "six-ornament" enlightenment throne. At the base of this symmetrical throne are two elephants, each with a blue mythical creature known as a sharabha standing upon its back. Above the red manes of these two sharabha is his throne's jeweled crest-bar, which rests upon the square back of the throne. On either side of the crest-bar stand two ferocious makarasor 'water monsters', each with an elaborate scrolling yellow tail. Above again are two coiling naga-serpents, which are grasped in the talons of the red garuda that crowns his throne. Across the top of the painting is an embroidered silk canopy, with hanging tassels and silk pleats at each end.

This lovely miniature is painted in the early Newar style that evolved during the 15th century under the patronage of the Tibetan Sakya School, which found its greatest artistic expression in the frescoes and thangkas of Ngor Monastery in south-central Tibet. The Ngor style is characterized by its arabesque roundels that overlay most of the flat areas of color, and by its stylized scrolling motifs, such as is revealed in the blue roundels in the background, and the ornate scrolling makara tails that appear in this composition.

The dark blue background of this painting is decorated with a half-drop pattern of scrolling roundels.