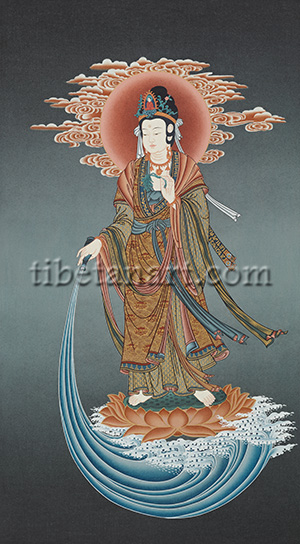 This Sino-Japanese composition depicts Avalokiteshvara, the bodhisattva of compassion, in the androgynous form of Kuan Yin, who can appear in either male or female form in the Chinese and East Asian Buddhist traditions. The name Kuan Yin (or Guanyin) is an abbreviation of Kuan Shi Yin or Guanshiyin, meaning the "One who Perceives the Sounds (or cries) of the World". Avalokiteshvara as Kuan Yin is now the most popular deity of the Chinese Buddhist pantheon, where he was first represented as a male deity. However, during the Yuan Dynasty (1279-1368) Kuan Yin progressively began to appear in androgynous or female form as the "Goddess of Mercy", and this accords with the Lotus Sutra, which describes Avalokiteshvara as a bodhisattva who can manifest in any human or non-human form or gender.

In China Kuan Yin's sacred abode is Mount Putuo or Potalaka, an island to the south of Shanghai that bears the same name as Avalokiteshvara's Indian abode of Mount Potala. From China the cult of this popular 'Goddess of Mercy' spread to Korea, Japan, Vietnam, Thailand and Indonesia. In Japan Kuan Yin is commonly known as Kannon, and is especially associated with the Pure Land traditions of Amida or Amitabha Buddha, where fortunate disciples take rebirth in androgynous or asexual human forms.

In China Kuan Yin has thirty-three principal forms, which include: Water-Moon; Willow-branch; White-robed; Sutra; Rock-cave; Dragon; Lotus-leaf; Fish-basket; Flowing-water; Blue-throated, and her aspect as the longevity goddess White Tara. Porcelain statues of White-robed Kuan Yin are frequently found in museums or emporiums, and in this form as the "Bestower of Children" she became very popular with the Jesuit missionaries in China, who identified her benign child-holding appearance with that of the Virgin Mary.

In this painting Kuan Yin appears in the androgynous form of a bodhisattva with feminine features but with flat breasts. She stands upon the seed-head of a red lotus that floats upon the swirling waves of the sacred water that she pours from the flask or vase in her right hand. This pure ambrosial water flows in a never-ending stream, representing her ability to alleviate the thirst of hungry ghosts or tormented spirits, and to purify the defilements and sufferings of all beings. The waves also represent her ability to rescue those in peril on the seas that surround China, Korea, Japan, and Southeast Asia. With the fingers of her left hand she holds a sprig of willow in front of her heart, with which she blesses or consecrates beings by sprinkling water as the 'dew' of her compassion. The weeping willow has many healing properties in Chinese medicine. From its bark aspirin was derived, and its leaves frequently replaces Avalokiteshvara's lotus as a principal attribute of Kuan Yin.

Kuan yin wears various robes or garments of richly embroidered Chinese silk, some of which are fastened with flowing silk belts. A long red and green scarf is draped around her upper body and arms, and a silk valance hangs behind her back. She wears the golden ornaments of bracelets, earrings, an amulet necklace, and a golden tiara that bears the lotus-mounted form of Amida as a seated white buddha wearing red monastic robes. Kuan Yin's compassionate white face is moon-like in appearance with two graceful bow-shaped eyes, and her sapphire-black hair is piled up into a large bun or topknot that is bound with a golden headband and a long white ribbon. Clouds adorn her red halo to indicate her great stature as a goddess of mercy who occupies the vastness of space between the sea and sky.