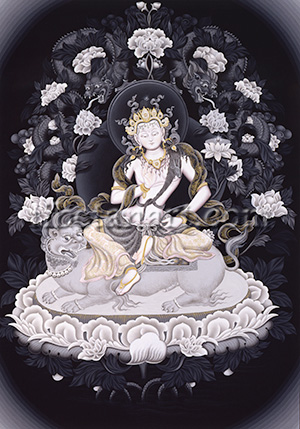 Harivahana, meaning 'Lion-mounted' or 'Lion-vehicle (Skt. vahana)' Lokeshvara, appears as one of the hundred-and-eight different manifestations of Avalokiteshvara, the bodhisattva of great compassion, in the Newar Buddhist tradition. He is peaceful, youthful and ruby-red in colour with two eyes and two arms, and sits in the posture of royal-ease upon his golden lion vehicle.

In this essentially black-and-white composition Lokeshvara's lion crouches upon a white moon-disc and a lotus that is supported by leaves and buds. The stem of this lotus arises from the waves of a dark lake, with the coils of several naga-serpents appearing before it. Lokeshvara's fierce lion is adorned with a crowning jewel, anklets, a collar of little round bells, and a silk saddle-blanket. With his head turned back towards Lokeshvara the lion gazes forward, with its penis erect, and its mane streaming upwards.

Harivahana Lokeshvara is adorned with the five divine silk garments and eight jewel ornaments of a sambhogakaya deity or bodhisattva, and his characteristic emblem of a deerskin is looped over his left shoulder and breast. Half of his long black hair is bound up into a jewel-crowned topknot, while the other half hangs freely about his shoulders and back. His right hand is held before his heart in the abhaya-mudra of dispelling fear or giving refuge, while with his left hand resting at the level of his hip he holds the stem of white lotus that blossoms at the level of his shoulder, with a radiant gem shining on the centre of its moon-disc.

In this composition the artist, Amrit Dangol, has applied layered designs in gesso over each of the jewel ornaments that adorn Lokeshvara - his crown, earrings, necklace, bracelets, armlets and anklets. These embossed gesso designs are fashioned in the form of raised pearls, lotus petals and scrolling jewels, and are painted in gold and silver. Glued upon each of the five main jewels of Lokeshvara's crown is a small faceted crystal, and similar crystals are glued upon his earrings and necklace.

A strong three-dimensional effect is created by the subtle use of shadow in this composition, especially with the shadows that fall upon his aura, and the flower, leaf and dragon elements in the dark background. The claws of two symmetrical dragons rest upon his halo, as they coil amidst a profusion of white lotuses, dark leaves and entwined stems.