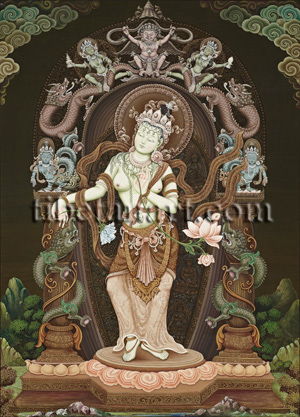 This beautiful painting of standing Green Tara by Amrit Dangol was painted in 2006 and won first prize in the annual Nepal Academy of Fine Arts exhibition of that year. Green Tara stands gracefully in tribhanga or 'triple-bend' posture as she dances on the moon-disc that rests upon the seed-head of her lotus pedestal, with her titled head turned towards the right. She is light green in complexion, and youthful as a sixteen-year-old, with two arms, two beautiful breasts, a narrow waist, and two compassionate bow-shaped eyes.

She wears the silver Newar ornaments of an ornate five-jeweled crown, that is fastened with a headband of various twisting silk ribbons; bearing a small image of Amoghasiddhi Buddha at its centre, and pearl loops that hang over her forehead. Her large round earrings are shaped like flowers, and from her neck-choker hang pearl-loops bearing crystal ornaments. A square medallion on a silver chain forms her long necklace, and her paired armlets are both made of silver and gold. Her bracelets, anklets, belt are all fashioned from gold, as is the elaborate floral Newar ornament that hangs from her waist, bearing a large square medallion with hanging pendants.

Her long underskirt is embroidered with motifs of the 'Eight Auspicious Symbols' (Skt. astamangala) – a precious banner, parasol, eternal knot, wheel, lotus, treasure vase, conch, and paired fishes. Her brocade upper skirt is tied with a silk ribbon, with jewel-loops and a pleated valance hanging below. A silk sash loops over her left shoulder and chest, and a long and billowing silk scarf entwines around her upper body.

Half of her long black hair is bound up into a topknot crowned with a radiant gem, while the other half hangs freely over her back and shoulders. With her lowered right hand she makes the boon-granting varada-mudra of supreme generosity, as she gracefully holds the stem of a blue night-lotus between her thumb and index finger. And with her left hand held in front of her heart she makes the abhaya-mudra that dispels fear and grants refuge, as she holds the long stem of a pink lotus between her thumb and second finger. This stem bears a closed bud, a fully-opened blossom, and a partially-opened bud, which collectively symbolize the Buddhas of the three times, past present, and future.

Her halo is embellished with scrolling ornaments, while her inner aura is decorated with entwining tendrils and lotuses that bear auspicious emblems of a crossed-vajra, garuda and lion, and the seated images of the Five Buddhas: with Akshobhya and Amoghasiddhi behind her right shoulder and waist; and Vairocana, Amitabha and Ratnasambhava at her top, middle and right side.

Tara's elaborate backrest or torana ascends from the lotus-mounted plinth upon which she stands, with symmetrical vases on either side bearing fluted pillars that ascend from within them. Delicate tendrils and fierce jewel-grasping water dragons coil around these pillars, and upon the ornate lotus-topped capstones that crown each of these pillars stand a pair of unusual mythological female (right), and male (left), creatures. These I would identify as kinnara-nagas, with the upper human bodies and feathered feet of Buddhist kinnaras (literally 'what-men') and the long twisting tails of serpents. The ends of their tails coil around the upper claws of the paired jewel-grasping dragons that appear above, with two goddesses standing astride the tail of each dragon.

These goddesses wear similar silver ornaments to Tara and hold the paired silver attributes of a Newar 'vermilion-powder container' (New. sinhamu), and a 'divine mirror' (New. jwalanhayakan. The squatting form of Garuda crowns the top of Tara's torana, as he clutches the tails of the dragons with his talons, and grasps two naga-serpents with his raised hands. A victorious banner crowns the scrolling backdrop of Tara's magnificent torana.