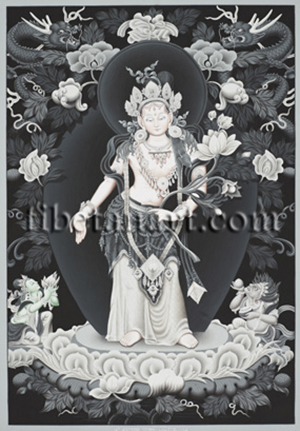 This black and white painting of Avalokiteshvara as Padmapani, meaning the 'Lotus in Hand', is a copy of a famous composition made by the legendary Newar artist, Anandamuni Shakya, in the early1940's, which hung in the old royal palace of Hanuman Doka in Kathmandu's Durbar Square. Anandamuni was almost certainly inspired to paint this image after being exposed to the early black and white photographic portraits that were taken of Nepal's rulers in all of their pomp, ceremonial regalia and military insignia. In many ways this revolutionary painting eventually served to define both the essential style and quality of the modern Newar art movement, giving rise to a freedom of expression that somehow parallels the Italian renaissance in its imaginative scope. Newar artists and scholars alike now acclaim this original black and white painting of Padmapani as a work of the highest genius. Its vivid three-dimensional and mysterious chiaroscuro effect, along with its meticulous precision and detail, clearly define this painting as one of the most important Newar artworks of the twentieth century.

Padmapani stands gracefully in tribhanga or 'triple-bend' posture upon the white moon disc of an open lotus. His silk loincloth falls gracefully around his lower legs and feet, and is decorated with a squared herringbone pattern. His darker apron above is edged with a metallic-like border, and from his jeweled belt hang loops of clear luminous pearls with bud-like pendants. He wears a billowing silk scarf around his shoulders, the left end of which terminates in a metallic valance below the level of his knee, and across his left shoulder hangs Avalokiteshvara's characteristic emblem apd a deer-skin or black antelope-skin.

His elaborate crown, with its five central jewel ornaments and small loops of hanging pearls, is delicately shaded to reveal the three-dimensional play of light and shadow across its embossed metallic surfaces. And this technique of 'metallic luminosity' is applied to all of the jewel ornaments that Padmapani wears - his earrings, bracelets, armlets, belt, and his three heavy necklaces. Around his neck he wears a choker bearing the cylindrical Newar tayo of the Kumari or young goddess, with a cluster of jewel pendants hanging beneath it. A chained Newar heart-ornament or sikrisila-mala hangs over his breast, with the shadows of its drop-shaped pendants falling across his chest. His third necklace appears as a long metallic garland of silver flowers, with a lower diamond-shaped pendant with a domed central boss and decorative pendants hanging from its sides. All of the precious metal ornaments are painted with incredible precision to create a vivid photographic and preternatural effect. All of the jewel ornaments appear to shine with an inner light, and the shadows cast upon the deity's body and garments creates a vivid illusion of dimension and weight to their forms.

Lokeshvara's right hand is extended downwards in the varada-mudra of supreme generosity, with the main mounds and lines clearly defined on its open palm. His left hand holds the thick stem of a white lotus at the level of his hip, which blossoms at the level of his left shoulder, its stem dividing into branches that bear delicately convoluted leaves and buds. The shadows of these floral motifs similarly fall upon his left forearm and aura to create an additional three-dimensional effect to his divine bodily form.

Padmapani's large ears and bow-shaped eyes bestow an otherworldly quality to the 'presence' of this great bodhisattva, whose light of compassion appears to illuminate the whole composition. A simple technique of shadowing is applied to the dark oval of his aura and the orb of his halo, which helps to project the bright three-dimensional form of the deity into the foreground. The background of the composition is uniformly black, and against this darkness the lighter shades of the surrounding foliage and the brightness of its blossoms are skilfuly contrasted. At the level of his crown are two symmetrical egg-shaped blossoming buds, which are rendered in vivid three-dimensional and sensual form. A pair of auspicious dragons ascend in the upper corners, while in the lower foreground are the leaves, stems, tendrils and fruits that support his lotus throne. To his lower right is the kneeling form of a beautiful young goddess, who offers a lotus blossom to Padmapani. And to his lower left is the form of a wrathful protective deity, who holds an alms-bowl of nectar in his left hand and offers a jewel with his raised right hand. Anandamuni's son, Siddhimuni Shakya, told me these two deities names were Lutavaha and Ranikunda, but these two deities are almost certainly derived from the forms of Green Tara and Hayagriva, who traditionally serve as the two principal attendants of Padmapani Lokeshvara.