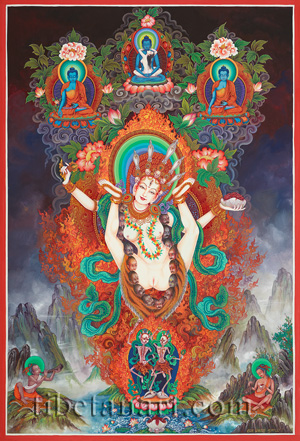 This painting shows the secret dakini aspect of Vajrayogini as White Khechari, whose practice is associated with the great eleventh century Indian yogini, Sukhasiddhi. Niguma and Sukhasiddhi were the two female yogini teachers of Khyungpo Naljor (10th-12th century), the founder of the Tibetan Shangpa Kagyu tradition, who considered Sukhasiddhi to be both his kindest teacher and his secret consort. The Shangpa Kagyu lineage is renowned for its unique Highest Yoga Tantra doctrines, known as 'The Six Doctrines of Sukhasiddhi' and 'The Six Doctrines of Niguma'. In appearance Sukhasiddhi is traditionally depicted as a peaceful white yogini who holds a skull-cup and points to the sky., while Niguma is represented as a semi-wrathful brown dakini who holds a skull-cup, a damaru, and a khatvanga. The 'Five Golden Doctrines' of the Shangpa Kagyu tradition are: The Six Doctrines of Niguma (the Root); Mahamudra (the Trunk); the Three Aspects of Bringing to the Path (the Branches); White Khechari and Red Khecari (the Flowers); Deathlessness and Non Deviation (the Fruit).

In the Newar Buddhist tradition the images of White Khechari and Red Khechari as the 'white and red flowers' of the Shangpa Kagyu tradition have recently become popular, with paintings and statues of Vajrayogini in her secret form as Mahasukhasiddhi being painted or cast. This painting was made by the Newar artist Raj Prakash Tuladhar, who has painted both the white and red forms of this great 'Bliss Accomplishing' dakini goddess. Essentially Red Khechari represents the wisdom teachings of Sukhasiddhi, while White Khechari represents the path of her method or skillful means.

With her legs spread wide open and pointed upwards White Khechari blissfully dances amidst the fiery aura of her innate wisdom-awareness, like a 'sky-going' (Skt. khechari; Tib. naljorma) dakini deity who abides in emptiness. She is youthful, passionate and extremely beautiful, and leans towards the left as she shameless reveals her vagina, full breasts and aroused nipples. Her naked and radiant white body is adorned with a long and billowing green silk scarf, a loosened tiger-skin loincloth, a long garland of severed heads, a garland of small flowers, and the heavy golden ornaments of bracelets, armlets and anklets, an ornate neck choker, and jeweled earrings. She has a sweetly smiling face with three piercing and intoxicated eyes, and her head is adorned with a five-skull crown that is sealed with five jewels and silver Newar kikinpa blades. Her tawny hair is coiled up into a mass of curls above her crown, with the colourful rings of her radiant fire-encircled halo blazing above. With her outstretched right and left hands she holds the two principal dakini attributes of a vajra-handled curved knife and a skull-cup full of blood.

A canopy of lotus flowers and leaves ascends above the radiant scrolls of her aura and fiery halo, with the clouds in the upper sky supporting the lotus thrones of three blue Buddhas who are each similarly surrounded by a canopy of lotus flowers and leaves. At the top centre is the blue primordial Buddha Samantabhadra in sexual union with his white consort, Samantabhadri. And to the left and right are the Medicine Buddha and Akshobhya Buddha, who are both quite similar in their forms and appearances.

Directly below Sukhasiddhi are the two skeletal forms of Citipati, the 'brother and sister' protectors of the charnel ground, who dance in bow-and-arrow posture with their legs interlocked as they respectively stand upon a white cowry and a conch shell. Each of these skeleton deities has three eyes and is adorned with a vajra-topped five-skull crown, a billowing green silk scarf, and a silk loincloth and belt. The brother wields a skeleton club and a blood-filled skull-cup in his right and left hands, and his sister holds a golden water pot and an ear of grain. Their twin-aura is surrounded by a blazing mass of fire, while their lotus pedestal rests above the turbulent waters of a lotus lake. Seated upon a tiger-skin on the rock formation on the left side of the lake is the Indian Mahasiddha Naropa, who blows upon his antelope horn. And seated upon a similar tiger-skin and rock formation on the right side of the lake is the Mahasiddha Kukkuripa, who holds a skull-cup in his left hand as he lovingly strokes his faithful dog with his right hand. The billowing mists that enshroud the lake swirl softly among the steep rock peaks of the background landscape, and at the bottom centre is a skull-cup containing an offering of the five sense organs.