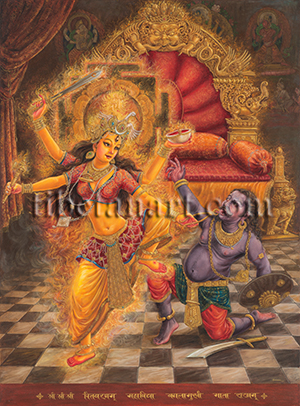 Bagalamukhi, the 'Crane-headed One', appears as the eighth of the ten mahavidya goddesses, and she is also known by the names of Bagala (the crane): Pitambara-devi (the yellow-clad goddess): Bakamukhi (heron-faced), and as Vagla or Vagalamukhi. Her legend relates how an asura demon named Madan, 'The Seducer', once gained the boon of vac-siddhi or omniscient speech through practicing great austerities, whereby everything he said came to pass. Intoxicated with this power Madan began to use this siddhi to defeat all opponents, often killing beings by sentencing them to an instant death. Enraged by his behaviour the gods petitioned Mahadevi to intercede on their behalf, thus this Great Goddess manifested in the yellow form of Bagalamukhi. Seizing Madan by his tongue she instantly paralysed his power of speech, but just as she was about to pulverize him with her club, Madan pleaded that he might be worshiped along with her in the future. Bagalamukhi conceded to his last request, and thus Madan now traditionally appears cowering below this great mahavidya goddess.

The act of destroying any being's power of speech is known as vak-stambhankari or 'Speech Paralysis', and Bagalamukhi's principal function is to paralyse the speech and mental faculties of all opponents or enemies. In this respect she is known as the 'Paralyser of the Three Worlds'; the 'All-pervading Paralyser of Body, Speech and Mind': and 'She who paralyses the speech and feet of all evil beings, who pulls their tongues out, who destroys their intellects'. As such she is often evoked to win lawsuits, to gain power or position, to render opponents speechless, to block or paralyse (Skt. stambhana) all enemies, and to increase eloquence, memory, knowledge, prosperity and success.

This original oil painting by Samundra took about four months to complete, and shows Bagalamukhi in the act of paralysing the asura demon Madan. The background portrays the interior of Bagala's mandapa or 'jewelled pavilion', with its chequer-tiled floor, rear fresco wall, and her ornate throne that takes the form of a luxurious cushioned divan of red and yellow silks. The front legs of this divan are supported by golden lions bearing the jewel-topped sides of her throne on their backs. Her throne's padded backrest is fashioned from radiating sections of pleated red silk, with cylindrical cushions resting upon the flat expanse of her red silk divan. And her throne's golden torana is ornamented with two makara or 'water-monsters' that stand on square pedestals and support lotuses upon their scrolling tails. Upon these lotuses sit two golden cranes, and above is the crowning central image of a serpent-devouring 'Face of Glory' (Skt. kirtimukha) that is adorned with a crest of seven jewel-topped naga-serpents.

Bagala has stepped down from her throne in order to subdue Madan, and now stands in warrior-stance with her left foot pressing upon the right knee of this cowering asura demon. She is extremely beautiful and golden-yellow in complexion, with three lotus-like eyes and four arms. Her divine form emanates a blazing aura of wisdom-fire, and behind her head appears the fiery form of her geometrical yantra, with her embossed golden bija or seed-syllable, HRIM, appearing directly above her head.

Bagala wears an upper bodice of embroidered red silk, a yellow silk underskirt, a red upper-skirt, and an apron of bone and pearl beads. She is adorned with the traditional Newar ornaments of a Kumari: with heavy golden bracelets, armlets, anklets and foot ornaments, golden earrings and a five-jeweled crown. Her ornate golden belt is sealed with a six-pointed star and supports her heavy jabhin or waist-valance. Around her neck hang the Kumari's cylindrical tayo and neck-choker, a pearl necklace bearing a small jantara or 'reliquary-box', and an embossed silver 'heart ornament' that hangs from a silver chain. The long tresses of her hair hang freely about her back and shoulders, and her tiara is sealed with a crescent moon, two small golden cranes, while a large white crane with outspread wings rests upon the crown of her head.

With her lower left hand Bagala squeezes a pair of tongs as she pulls out Madan's tongue, and with her lower right hand she wields a golden hammer adorned with an elephant's head. In her second pair of left and right hands she holds aloft a skull-cup full of fresh blood, and a blazing iron sword. Her three alluring eyes are lined with cosmetic black kohl, and her fingertips and feet are decorated with henna.

Madan kneels in supplication at Bagala's feet, his right hand raised as he implores the goddess to allow him to be included in future depictions of her. And thus in pictorial art Madan's last wish was granted just before she annihilated him. Madan is pot-bellied, strong limbed, and blue-black in colour. His ferocity is revealed by his demonic eyes, furrowed face, curling hair and mustache, and by his four sharp canine teeth. He wears gold earrings, bracelets and anklets, a heavy golden choker with the serpent-devouring image of a garuda's head at its centre, a golden heart-ornament hanging upon a heavy chain, and a small golden amulet-box is fastened around his left arm. He wears orange silk trousers, an embroidered blue loincloth, and a heavy golden belt and jabhin or waist-valance. With his left hand he holds a shield embossed with golden roundels, while his cutlass lies fallen at his feet. The Ranjana inscription across the bottom of the painting reads: Shri Shri Shri Pitambarama Mahavidya Bagalamukhi Mata Sara Nama – meaning 'The Three Times Glorious Yellow-clad Wisdom Goddess, the Crane-faced Mother with the Auspicious Name.'

Yellow clothing, saffron flowers, turmeric powder, a rosary of round turmeric beads, and other yellow substances are employed in tantric rites of stambhana or paralysing. The yantra of Bagalamukhi is traditionally drawn in saffron or turmeric powder, and consists of a downward-pointing triangle with a red 'seed' (Skt. bija) at its centre that appears within a yellow six-pointed star. The main Newar temple of Bagalamukhi is located in the Newar city of Patan, where the goddess is lavishly worshiped on Thursdays. There are only a few Bagalamukhi temples in India; the most ancient is situated in the Kangra Valley, and the most modern at Datiya in Madhya Pradesh. A sadhu named Puja Swami established the Datiya temple during the 1930's, and its main function was to help India gain independence by paralysing her obstructive 'enemies', the British Raj.

In India both the crane (bagala) and heron (baka) are viewed as birds of deceit; as they appear to stand perfectly still for long periods in shallow water as if they were meditating, while in reality they are only seeking to catch fish. The metaphor of a crane or heron is thus applied to some 'deceitful' Indian sadhus, gurus or holy-men, who often publicly appear to be absorbed in meditation when they are really hoping to derive some material benefit, recognition or spiritual praise. In contrast the term hamsa or paramhamsa, meaning 'Great Swan', is often employed for an authentic Indian holy-man, or for an enlightened sage who is able to differentiate truth from illusion, just as the elegant swan is said to be able to separate milk from water.