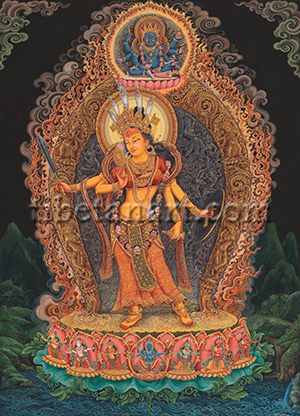 Within a sombre landscape of the five elements, Mahalaskmi, the 'Great Auspicious' matrika or 'mother goddess' stands gracefully in tribhanga or 'triple bend' posture upon the golden seed-head of an ornate pink lotus-throne. She is golden-yellow in complexion, with three eyes, four arms, and a beautiful, dignified, and youthful countenance. She is attired in garments of embroidered red silk, with an upper bodice and long skirt, and a long billowing silk scarf that floats gracefully about her upper body. She wears golden earrings, bracelets, armlets and anklets, and a jeweled belt adorned with circular bells, from which hangs a heavy chequered brocade valance or jabhin, that is ornamented with golden skulls and edged with lotus-petals. Her golden tiara is adorned with five jewel-topped skulls, two square victory flags, and five silver Newar kikinpa blades. These blades are embellished with flowers and crescent moon symbols, and their tops are crowned with little silver parasols.

Around her neck she wears the necklaces of a Newar kumari or 'virgin goddess'. These consist of an ornate golden neck choker, a cylindrical golden tayo with embroidered straps, a chained gold wheel medallion, a necklace of golden coins, a silver chain bearing an embossed Newar medallion (sigrimala), and a long garland of freshly severed asura heads that are strung together on a thin golden chain. Her eyelids are lined with black kohl, her forehead is adorned with vermilion powder, her feet are marked with henna, and she wears silver rings on her first left hand. Half of her long sapphire-black hair is bound up into a topknot, while the other half flows freely about her back and shoulders.

With her first pair of right and left hands Mahalakshmi holds her traditional attributes of a golden mirror (darpana), and a golden container for vermilion powder (sinhamu) with five parasol-wheels adorning its top. Traditionally these Newar attributes are made of silver and are respectively given to a bride-to-be by her father and mother as part of her dowry. Mahalakshmi holds the mirror before her face, gazing into it as the light rays of her own luminosity reflect back upon her face, while she gracefully holds the vermilion container at the level of her hips. With her second pair of extended right and left hands she holds an iron sword and a shield, symbolizing her abilities to vanquish all enemies and to protect her devotees.

Mahalakshmi's halo is composed of concentric rings of golden light, with an outer rim of golden pearls and scrolling motifs. Her lotus throne is supported by a large convoluted lotus leaf, which rests upon a bed of smaller leaves above a turbulent lake. The seven main petals of this lotus point upward, and in each of these petals are depicted one the other seven goddesses that collectively form the assembly of the 'Eight Mothers' (Skt. astamatrika). Each of these mother goddesses stands upon a small sun disc and lotus throne, with the seven pink and gold-edged petals defining the shape of their auras. Squatting upon a corpse within the central petal is the wrathful, emaciated, six-armed blue form of the matrika Chamunda, who wears a tiger-skin loincloth, makes the bindu-kapala-mudra with her first pair of right and left hands, holds a trident-topped khatvanga and a rope snare in her second pair, and a sword and shield in her third pair of hands.

Each of the six other matrika goddesses standing to the right and left of Chamunda are similar in appearance to Mahalakshmi, with their principal right and left hands making the bindu-kapala-mudra, and their second pair of extended hands holding a sword and shield. On the three petals to Chamunda's right are: golden Indrani, with her horizontal third eye; white Maheshvari (Rudrani); and yellow Brahmani. And on the three petals to Chamunda's left are: green Vaishnavi, red boar-faced Varahi, and red Kaumari. Depicted upon the eight rear or secondary petals of the lotus are the Eight Auspicious Buddhist Symbols (Skt. astamangala): with the lotus, treasure-vase, golden fishes and parasol to Chamunda's right; and the conch, eternal knot, victory-banner and golden wheel to her left.

The golden seed-head upon which Mahalakshmi stands is decorated with scrolling floral motifs that merge nebulously upward into her dark inner aura, forming an intricate frieze for an assembly of celestial musicians, dancers and offering goddesses, who appear in the female forms of apsaras. At the lower right of Mahalakshmi's inner aura a group of three apsaras stand with their palms folded in supplication, while above three other goddesses dance, and another two play upon cymbals and a lute or vina. On the lower right another group dance and make offerings to Mahalakshmi, while a further four dance above – one playing a flute, another sounding a damaru, and a third holding a flask of consecrated water.

The golden scrolls ascending from the base of Mahalakshmi's outer aura form the stems of two small lotus-pedestals, which support the symmetrical forms of the two great Indian river-goddesses, Ganga and Yamuna. With her legs gracefully crossed Ganga stands upon her makara or crocodile-vehicle, while Yamuna stands on her kurma or turtle-vehicle. Ganga holds a sinhamu or vermilion powder-container in front of her heart with her left hand, while grasping a scrolling tendril with her raised right hand. Yamuna holds a golden mirror (darpana) with her raised left hand, while her right hand makes the bindu-mudra in front of her heart. The upper scrolls of Mahalakshmi's outer aura support the lotus thrones of Shiva's two 'sons', Ganapati and Kumara, who appear in standing four-armed forms. Elephant-headed Ganapati makes the bindu-mudra and holds a rosary with his two right hands, and a bowl of Indian laddu sweets and an axe with his two left hands. Kumara makes the abhaya-mudra of dispelling fear and holds a rosary with his two right hands, and a water-flask and a cluster of three peacock feathers in his two left hands.

A blazing mass of flames encircles Mahalakshmi's outer aura, and seated above her head within a double aura of blazing fire is her lord and counterpart, Samhara Bhairava, the 'Terrifying Destroyer'. Samhara Bhairava is blue-black in colour and extremely wrathful, with three round red eyes and six arms. He sits upon his corpse-vehicle, sun disc and lotus, wearing a tiger-skin loincloth, a vajra-scarf, a garland of severed heads, a five-skull crown, and gold ornaments. With his three right hands he holds a skull-cup full of blood, a golden vajra, and a khatvanga; and with his three left hands he holds a serpent-noose, a damaru, and a golden flask of nectar.