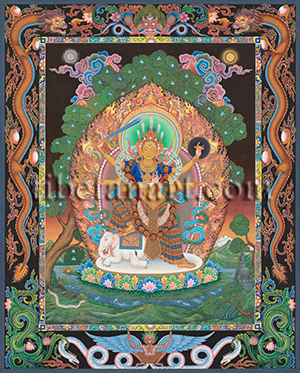 This exquisite painting of the matrika or 'Mother Goddess' Indrani was originally drawn by Uday Charan Shrestha and then painted in 2005 by his student, Madan Kiju. However, Uday very skilfully reworked this composition for me in 2006, taking several months to transform this work into a masterpiece of his own inimitable style. Traditionally Indrani is depicted as orange-yellow, but here her body is painted and subtly shaded in pure gold - a technique that requires great skill.

Indrani stands leaning towards the right in alidha posture, with her left foot resting on her silver-white moon disc and multicolored lotus, and her right foot resting upon the back of her white elephant vehicle. This elephant is Airavata, the creature that Indra took as his mount during the legendary 'churning of the cosmic ocean', and whose name is derived from iravat, meaning 'produced from water'. Four-tusked Airavata kneels in supplication beneath this great goddess, wearing a silk saddle blanket and two golden necklaces adorned with a white skull and a bell.

Indrani is extremely beautiful and youthful in appearance, with full breasts, a slender waist, three lotus-like eyes, and six arms. She is adorned in divine silk garments, with a deep blue bodice that reveals the contours of her breasts, a pleated skirt of embroidered red, blue and gold silk, and an elaborate hanging silk apron and hip sash. She also wears a stiff white vajra-scarf decorated with entwining lotuses, which protectively encircles her shoulders before it terminates into the long billowing green and blue scarf that flows over her two principal forearms and behind her lower body. She is likewise adorned with all manner of gold and jewel ornaments, with her golden belt displaying the six-pointed star of her yantra. Her golden five-skull crown is decorated with five intricately mounted jewels with their ascending silver kikinpa blades, hanging jewel loops, little flowers, and the long billowing silk ribbon that binds her crown. Half of her sapphire-black hairlocks are piled up into a topknot, with the other half hangs freely over her back and shoulders.

Like Indra, this goddess has the distinguishing feature of a horizontal third eye. This peculiarity derives from a legend where Indra once tried to seduce Ahalya, the wife of the sage Gautama, and was cursed by the sage to bear a thousand vagina-like orifices on his body. These 'thousand vaginas' (Skt. neta-yoni) were later transformed into eyes, and in this form Indra was known as Sahasraksha – the 'Thousand-Eyed', while his horizontal third eye still remains as a stigmata of this legend.

With her first pair of right and left hands Indrani holds a skull-cup of blood as she gracefully makes the bindu-kapala-mudra in front her heart. With her second pair of outstretched right and left hands she holds Indra's attributes of a vajra and a rope noose, and with her third pair of hands she wields a sword and a shield. Like 'Indra's Bow' (the rainbow) her halo is decorated with colored bands of rainbow light and encircled with three rings of fire. Her aura scintillates with countless rays of golden light, and is sealed with an inner arc of dry white skulls and a blazing outer arc of multicolored wisdom fire.

A great wish-granting tree blossoms with fruit-like emblems of the 'triple gem' behind Indrani's aura, while rainbow-colored clouds and the discs of a silver moon and a golden sun appear in the dark sky above. In the lower landscape are trees, a lake, rocky hills and snow-capped mountains. A stone stupa appears to Indrani's left, with a serpent and a small Shiva lingam at her right. The outer torana of this painting depicts a pair of ascending jewel-grasping dragons, the crowning head of Cheppu as the 'face of glory' (Skt. kirtimukha); with entwined floral motifs and the lower image of a garuda subduing two naga-serpents in the bottom area.