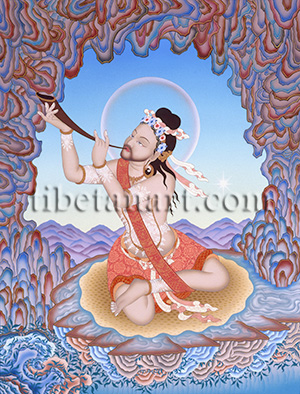 The Indian mahasiddha Naropa (1016-1100) was born into an aristocratic Bengali family, and first went to study in Kashmir before being recalled by his parents for an arranged marriage. After eight years of a happy married life he returned to Kashmir and ordained as a novice monk who soon became renowned for his great learning. By the age of twenty-eight Naropa had become one of the four great abbots of Nalanda University in the Indian state of Bihar; a position he held for eight years until his understanding of the teachings were undermined by an ugly old woman, who claimed she was Tilopa's sister. Upon hearing Tilopa's name great devotion arose in Naropa's mind, and he left Nalanda and set out to find Tilopa. However, his spiritual apprenticeship under Tilopa was no easy task, as Naropa first had to undergo twelve terrifying trials before he was even accepted as a disciple. After much hardship Naropa's realization came to equal that of his guru, and he is particularly known for a specific set of tantric practices known as the “Six Yogas or Doctrines of Naropa”.

These Six Yogas are: (1) The yoga of inner heat (Tib. gtum-mo; (2) The yoga of clear light (Tib. 'od-gsal); (3) The yoga of illusory body (Tib. sgyu-lu); (4) The yoga of the intermediate state (Tib. bar-do); (5) The yoga of consciousness transference (Tib. 'pho-ba); (6) The yoga of dreams (Tib. rmi-lam). These six advanced yogic techniques form the core of the completion stage practice in the Kagyu School, and also later became popular in the Gelug School. A similar set of these Six Yogas originated from the female yogini Niguma, who was originally the wife and later the spiritual consort of Naropa.

Naropa's famous Tibetan disciple was Marpa Lotsawa (1012-1097), or 'Marpa the Translator', who in turn was the main teacher of Milarepa (1040-1123), the great 'cotton-clad' poet-saint who is particularly remembered for his 'Hundred-thousand Songs of Realisation'.

Naropa is shown seated upon a spotted deerskin within the aperture of a cave as he triumphantly blows upon a long antelope horn. He wears an embroidered loincloth, a meditation belt and jeweled ornaments.