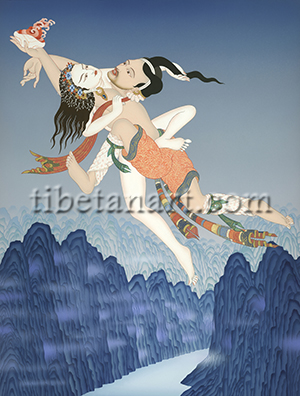 Carbaripa or Carpati, the 'Petrifier', is listed as the sixty-fourth of the Eighty-four Mahasiddhas in the tradition of Abhayadatta Sri, and he is revered in both the Buddhist and Hindu Tantric traditions. For the Vajrayana Buddhists he is one of great early Indian Mahasiddhas, and for the Hindus he is regarded as one of the nine great 'Nath Siddhas' of the Indian Shaivite lineage, and as a preceptor of the Hindu Hatha Yoga traditions.

In his Indian Buddhist legend Carbaripa is identified as a siddha from the Chamba region of the west Himalayan foothills who possessed the ability of being able to turn people into stone statues of the Buddha through the power of sprinkling them with consecrated water. His main disciple was Dumapa, the son of a herdsman of buffaloes, who gained the psychic powers of the 'Eight Great Siddhi' from various parts of his body. Here Carbaripa is depicted flying in sexual union with his consort, as they soar together across a deep Himalayan river gorge.